Houston-based Occidental Petroleum Corp. (Oxy) plans to sharply reduce capital spending in 2020, particularly in the Permian Basin, in the aftermath of its megadeal to acquire Anadarko Petroleum Corp. 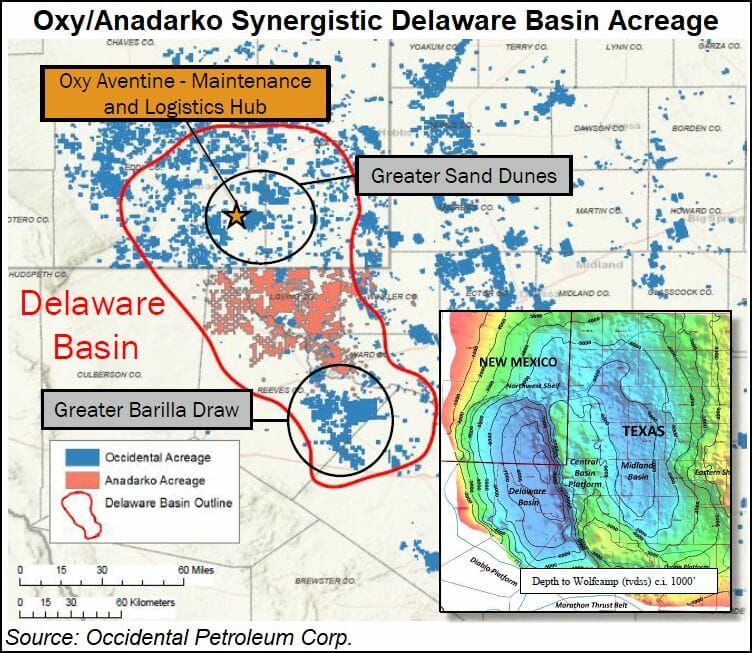 CEO Vicki Hollub, who helmed a conference call Tuesday to discuss third quarter results, said the combined teams are finding synergies allowing capital expenditures (capex) to fall in 2020 by almost 40% to $5.4 billion. The combined Oxy-Anadarko businesses are set to spend $8.6 billion this year. Oxy completed the takeover, estimated at $55 billion including debt, in early August.

Most of the cost cutting is in the Permian West Texas operations using synergies combining best practices of Oxy and Anadarko, Hollub said.

“We’re as excited today as we have been anytime in the last two years about the opportunities in front of us,” Hollub said. “Now that we’ve had a chance to work together, the two teams, we’re coming up with more synergies.”

Oxy’s Permian acreage in New Mexico is the “1A” production area, Hollub said, while Anadarko’s leasehold, mostly in West Texas, is “1B.”

“Post-acquisition, Oxy’s diversified portfolio provides numerous competitive advantages,” the CEO said. “Oxy is now the largest oil and gas leaseholder in the United States on a net acreage basis, providing us with ample opportunities” in the Permian, Denver-Julesburg (DJ) and Powder River basins and the deepwater Gulf of Mexico, “to selectively deploy capital in a way that optimizes capital intensity.”

Interest in Oxy’s 2020 capex plans are high, she told investors.

“When we communicated our annual synergy target of $2 billion, we also stated that capital spending would be reduced by $1.5 billion, lowering our company-wide annual production growth from approximately 10% to 5%. We have gone further than this for 2020.

“We anticipate that the combination of lower capital spending and production growth will generate greater free cash flow, enhanced by our industry-leading capital efficiency…”

Next year’s production growth is to be driven by the Permian, with production from other areas “to be flat or grow at a reduced rate compared to 2019,” she said.

Permian production is expected to be up 5% next year using eight net rigs. In the DJ, three operated rigs are planned.

“Similar to 2019, our 2020 capital program is dominated by short-cycle investments…Oxy remains flexible throughout the commodity cycle. And if necessary, in less than six months, we can reduce capital spending to sustaining levels.”

More asset sales are planned, although no specific details were announced. Anadarko’s legacy midstream unit, Western Gas Partners LP (WES), is being aligned to work with the upstream operations but it could be sold or monetized.

Hollub also spent a few minutes discussing how Oxy is enhancing its sustainability practices and reducing emissions, particularly in the Permian, where gas flaring by operators overall reached highs in the third quarter.

Oxy is working to reduce “routine flaring” and is “monitoring infrastructure for methane emissions,” said the CEO. In addition, Oxy is reducing the miles driven to transport supplies into the Permian via rail. On an annualized basis, Oxy has reduced an estimated 1.9 million truck miles per year, equivalent to 1,700 metric tons of carbon dioxide reductions.

“Also in this quarter in the Permian Basin, we brought online the largest solar facility in the state of Texas that directly supports oil and gas operations,” she said.

Oil and gas pre-tax income for 3Q2019 was $221 million, compared with $726 million in 3Q2018. The latest results included a $285 million writeoff of unproved domestic leases in areas where Oxy no longer plans to pursue exploration activities, and a $40 million impairment charge related to early termination of the Idd El Shargi South Dome contract in Qatar. Results also included a mark-to-market gain of $75 million on oil hedges. Excluding impairment charges and the mark-to-market gain, the decrease in income reflected lower realized oil prices.