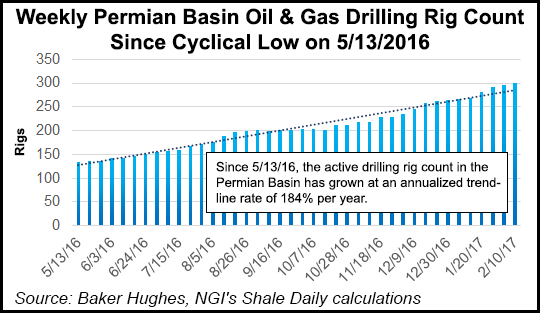 The company’s still-new leaders — CEO Vicki Hollub and Jody Elliott, U.S. president for oil/gas operations — have never encountered a well or acre among the company’s 2.5 million net Permian acreage that they didn’t like. “It is pretty hard to drill a dry hole there,” Hollub told analysts during a 4Q2016 earnings conference call.

Hollub and Elliott spent most of the call describing nine- and 15-rig scenarios that are built on driving efficiencies, steadily reducing per-well drilling costs and raising returns in the Permian, particularly parts of the Delaware and Midland basins of southeast New Mexico and West Texas, where Oxy already enjoys its highest returns. Since 2013, Hollub said Oxy has doubled its Permian production, “and we can double it again in the next four years.”

Hollub called Oxy “a more geographically focused company today with improved core competency in all of our core areas.” The Permian and some of Oxy’s ongoing oversea plays hold “significant remaining resource potential,” she said, pointing to the company’s recently released report that it replaced nearly 190% of its 2016 production during the year.

“We don’t feel like we have to look anywhere else, and the Permian and the Middle East will continue to play a critical role in supplying energy to meet the world’s ever-increasing needs,” Hollub said, predicting that production from Oxy’s core assets, such as in the Permian, will grow 4-7% this year.

Elliott spent a lot of time detailing Oxy’s plans for improving its operations on the sweet spots in its 2.5 million net acres in the Permian, concentrating on 650,000 acres in the Delaware and Midland basins, asserting that the company is “uniquely positioned to be a long-term leader in the Permian.”

Last year, he said Oxy increased the number of $50/bbl breakeven wells in the Delaware/Midland acreage by about 1,250 wells while increasing the average lateral length of each well by more than 20% to 7,100 feet. “This enabled us to drive double-digit growth from these assets,” Elliott said.

He said Oxy will continue to push the laterals longer for the whole inventory. “Technically, there is no problem; 10,000 feet early on in the horizontal development was a bit of a challenge, but 10,000 [feet] is no longer a challenge, and we’re looking at the option of 15,000 feet now.”

In 2017 in the Permian, Elliott said, the bulk of the new development will involve laterals of 7,500 to 10,000 feet. “If we have to develop a 4,500-foot lateral, it will be because we had already developed a section that way, and we really can’t change that, but most of our wells will be the longer version.”

Oxy’s Permian resources business “has been and will continue to be” the company’s highest-return business, Hollub told an analyst in response to a question. “We’ve said for a long time that the Permian is pretty much the foundation for our company.”

In response to whether Oxy plans to sell any noncore Permian assets, Hollub said the company “continues to look at opportunities to monetize things where it makes sense.” She said she was not prepared to talk about specific assets now, but “we’re continuing the review process and as we make decisions we’ll share that. It is something that we think about and evaluate pretty much on an evergreen basis.”