Occidental Petroleum Corp. is selling off 25,000 net acres in its West Texas holdings in the Permian Basin, along with the production, to private equity (PE) sponsored Colgate Energy Partners III LLC. 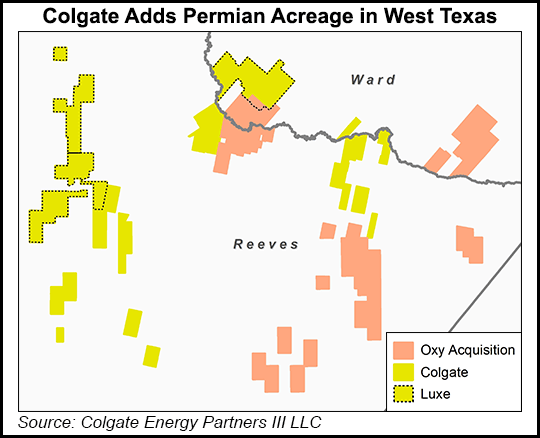 The $508 million deal by Oxy, as it is better known, includes 25,000 net acres in Reeves and Ward counties within the Delaware sub-basin, with about 360 active wells and production of 10,000 boe/d. Houston-based Oxy has an estimated 2.9 million net acres in the Permian that are spread across the Delaware and Midland sub-basins.

Proceeds from the sale, set to be completed by the end of September, would be used to reduce Oxy debt.

“We continue to advance our divestiture and deleveraging goals while delivering value for our shareholders,” said CEO Vicki Hollub. “This transaction brings our post-Colombia divestiture total to over $1.3 billion of the planned $2 billion to $3 billion, and since August 2019 we have divested more than $9 billion of assets.”

Even with the sale, Oxy’s guidance for capital and production for 2021 remains unchanged, she said.

Colgate co-CEOs Will Hickey and James Walter said the purchase would elevate the operations.

“The acquisition of these assets in the core of the southern Delaware Basin is a transformational deal for Colgate that checks all of the boxes of our acquisition criteria,” Hickey said. “It is a great mix of low decline production and high rate of return locations that will immediately compete for capital with our existing portfolio.

“Given the proximity to our current assets, we are confident that we can leverage our ongoing operations to maximize the value of this acquisition for our investors.”

Colgate earlier in June acquired most of the assets owned by Luxe Energy LLC in an all-stock transaction. The deal, already completed, included 22,000 net acres also in Reeves and Ward counties with production of about 17,000 boe/d net.

Combined with the Luxe assets, the Oxy transaction puts Colgate in a “differentiated position,” said Walter.

“These two transactions complement each other perfectly, creating a scaled business with increased relevance in public markets, and ample liquidity to execute on our highly accretive development program. The equity contribution from the Luxe transaction has put us in a place where we can fund a cash acquisition of this size while remaining squarely within our debt parameters.”

Colgate executives noted that the Oxy acreage package is 99% operated and held by production, with an 82% average working interest.

Once the Oxy transaction is completed, Colgate would have around 83,000 net acres, mostly in Reeves and Ward counties and in New Mexico’s Eddy County. Production would average 55,000 boe/d net. Colgate plans to run up to six rigs by year’s end across its Permian leasehold.