U.S. oil and gas producers that weren’t prepared to get down to business as prices rose may be out of luck, Occidental Petroleum Corp. CEO Vicki Hollub said Wednesday. 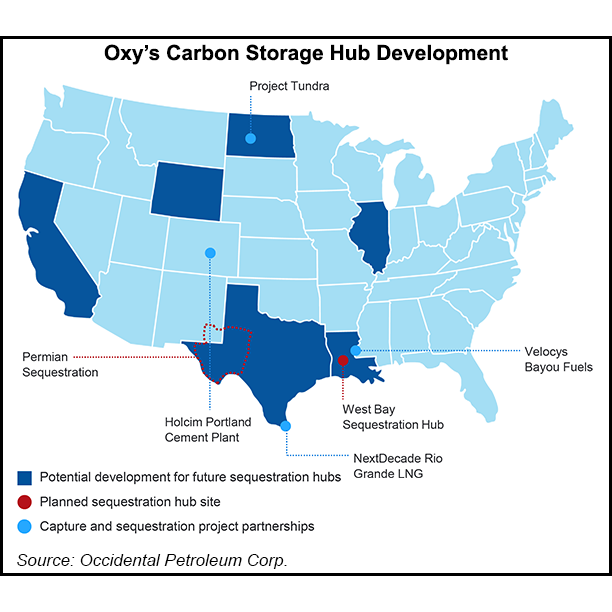 Hollub helmed a first quarter conference call, joined by CFO Robert Peterson and Richard Jackson, president of U.S. Onshore Resources and Carbon Management. They shared with investors what’s ahead in the Lower 48, deepwater Gulf of Mexico and overseas. The plans are centered around turning more wells to sales in the Lower 48, while laying plans to build carbon capture hubs in key locations.

For producers that were not prepared to ramp up following the upward swing in commodity prices, it already may be too late, Hollub said.

Oxy, as it is better known, had “materials lined up to purchase,” she said about the operations going into this year. “Anybody trying to increase activity at this point, not only in the Permian but also worldwide, would find it very difficult…

“With respect to the macro, I really don’t think there has been a time since I’ve been in our industry where inventories and spare capacity were both very low, and then you couple that with the supply chain challenges…

In addition, Hollub said the independents may be “trying as hard as they can to increase production, but we can’t destroy value units…If you try to accelerate anything now, some of the longer-term projects just can’t get started because of the cost involved.”

For Oxy, which had plans in place, ‘we’ve been able to mitigate some of the impact of the inflation,” Hollub said.

Oil and gas is Oxy’s bread and butter, but it’s not leaving behind its broader objective to get to net-zero emissions.

“We are advancing the technological solutions that can deliver large-scale and rapid emission reduction throughout our value chain,” Hollub said. “Additionally, our low-carbon strategy creates value for our existing businesses, while at the same time, helping to accelerate the past and net zero for ourselves and other leading companies in multiple industries.”

One direct air capture (DAC) facility to be sited in the Permian Basin could be sanctioned this year. Oxy secured its first agreement in March to sell up to 200,00 b/d of net-zero emissions oil over five years to SK Trading International. The net-zero emissions oil would be achieved by removing and sequestering the atmospheric carbon dioxide (CO2) through an enhanced oil recovery process.

Last month Oxy and Enterprise Products Partners LP proposed a CO2  transportation and sequestration hub that would serve oil and gas operators in the Greater Houston area. Similar hubs are on the drawing board across the Lower 48.

The oil and gas produced from fields around the world, led by the Permian, still supply the cash flow. Oxy also has U.S. upstream operations in the Denver-Julesburg Basin of Colorado and the deepwater Gulf of Mexico.

The issues affecting the oilfields, such as inflation, supply chain problems and labor shortages, remain top of mind. Oxy has $3.9-4.3 billion earmarked for the 2022 capital program. That total includes $250 million for inflation, Peterson told analysts.

“Cost of materials and services necessary for our operations, especially onshore in the United States, has continued to increase,” he said. “We are working to offset inflationary pressures through additional efficiencies, but price increases continue. We may spend near the top end of our capital guidance this year.”

The company is about at the activity level it will hold for the rest of the year, he said. Oxy plans to run about 17 rigs in the Lower 48 with five fracture crews.

“I think, importantly, as we think about this, the time to market was on pace,” Jackson said “We actually finished two wells online better in the first quarter and increased our total year outlook by 10…That was very important for us to continue to deliver that time to market on pace.”
Adding more wells led to “this inflection of growth going into the second quarter,” the operations chief said. “March was 24,000 barrels better than February.” Around 62% of the first quarter wells drilled were online by late March.

Thirty wells came online in the first quarter. In the second quarter, the number is set to increase to around 40, Jackson said. By the second half of this year, Oxy expects to bring online 100 wells total, split between the two quarters.

To show how the production is ramping up, Jackson noted that 7.5 rigs were running across the Permian Delaware in the last half of 2021. “In the first half of this year, it will be 12.”

The inflationary impacts have been big for oil country tubular goods, aka OCTG, Jackson said.

“We knew that going into the year…” Some OCTG costs have risen more than 100%, “and that’s meaningful. It’s about 7% of our capital.”

Oxy’s operations team has the supply situation in hand, Jackson said. Finding fracturing sand could have been an issue, but “we didn’t have any disruptions in the first quarter” that impacted bringing wells online. “We’ve been able to work with our development teams to be able to manage…both white and regional sand into our designs based on that supply.”