Occidental Petroleum Corp.’s vision to yank carbon emissions from the atmosphere in its top development, the Permian Basin, took a giant step forward Tuesday with the first engineering phase given the green light. 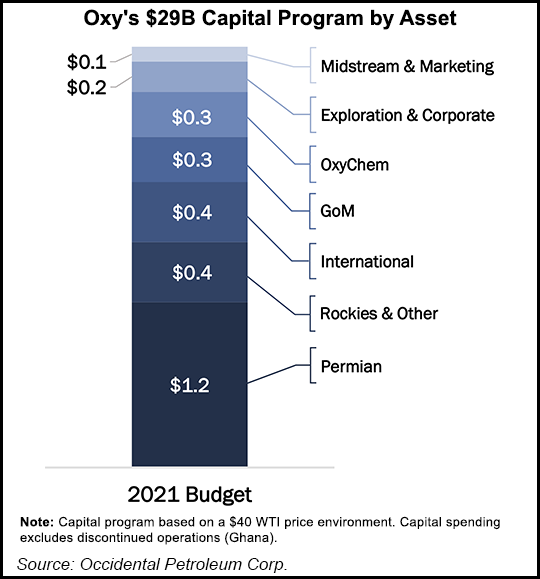 Australia’s Worley Ltd. was awarded the front-end engineering and design (FEED) for the first of four phases of the direct air capture (DAC) facility planned for West Texas. When complete, the facility would be capable of extracting 1 million metric tons/year (mmty) of atmospheric carbon dioxide (CO2).

The initial train, DAC 1, would represent the first commercial scale development to pull CO2 from the atmosphere. Oxy, as it is better known, is partnering with developer 1PointFive Inc. through Oxy Low Carbon Ventures LLC and with funding from Rusheen Capital Management LLC.

The FEED phase by Worley is centered on the first train, designed to capture 500,000 mmty. It could begin within the next three months, with completion by the end of the year. Once the FEED is completed, plans are to begin engineering, procurement and construction.

The Permian DAC facility could begin construction in 2022, with the buildout likely to take up to two years, Oxy CEO Vicki Hollub said Tuesday.

The ability to capture 1 mmty of CO2 “is about 5% of what we sequester annually” in the enhanced oil recovery (EOR) business today, the CEO told investors. DAC “is going to be a huge part of our future.”

Oxy is working on setting up services agreements with other companies that could “send their carbon from their facilities, from their plants or industry” to the DAC project, Hollub said.

The Houston independent is having “conversations” with the maritime, airline and the tech industries. The company has to ensure there is a “certified process” for partners so they can track the CO2 molecule from the reservoir.

“All the partnerships that we’ve developed so far have been with people who share our vision and our commitment,” Hollub said. “This is to create value for our shareholders, but it’s also the right thing to do for our operations and for the world.”

As Hollub has in the past, she was queried about the amount of investment Oxy is making in DAC, since a plant of this size has never been built.

The first DAC plant “will be the most expensive,” Hollub said, “but I don’t believe it’s going to take very many plants for us to build to get it to the point where it is economical” and does not need Section 45Q tax credits from the Internal Revenue Service.

By coupling DAC with an oil reservoir, “you don’t have to build a pipeline to take it very far. You’ve already optimized the cost of the initial build and the ability to get it in place and make it operate. And every component in the direct air capture is working somewhere. So it’s a matter of just putting the components together and getting them to be more efficient.”

“Although the storm had that meaningful impact on our Permian production, we expect the impact to be temporary as our operations recover quickly…We anticipate the full-year production will be essentially equivalent to our fourth quarter rate,” excluding a Colombia divestment last year.

Oxy also doesn’t plan to get ahead of itself, Hollub said.

“We expect to spend $2.9 billion of capital in 2021 to sustain our production at our fourth quarter production rate,” she said. Guidance is based on a $40/bbl West Texas Intermediate oil price.
Oxy is “prepared to flex spending lower if necessary. If oil prices continue to improve this year, we will not increase capital and support of production growth.”

Plans are to run six rigs in the Permian Delaware sub-basin of Texas this year, with one rig in the New Mexico Delaware leasehold. Another four rigs are planned in the Permian Midland sub-basin of West Texas. Another two rigs are scheduled to run in the Rockies. In addition, a drillship was returned to the Gulf of Mexico (GOM) late last year and “is expected to remain active throughout 2021,” Peterson said.

The Biden administration has paused issuing new drilling permits on federal lands and in the federal offshore for about two months. As Oxy holds leaseholds on federal lands in New Mexico, the Powder River Basin, and in the GOM, it could be impacted in securing future permits.

“We expect to continue working cohesively with regulators under the new administration, while demonstrating our commitment to safety and the environment,” she said.

“We expect our operations on federal land to continue, and we have more than 350 approved permits in New Mexico and approximately 175 in the Powder River Basin, with many more pending in the Gulf of Mexico. We have not experienced any impact on operations.”

Excluding Colombia, which was sold in December, Oxy’s total average production for the fourth quarter was 1.14 million boe/d, which exceeded the midpoint of guidance by 13,000 boe/d.

In the Permian, production was 382,000 boe/d, well above guidance. All the other domestic operations also came in near the high end of guidance with production of 518,000 boe/d. International average daily production volumes were 243,000 boe/d.