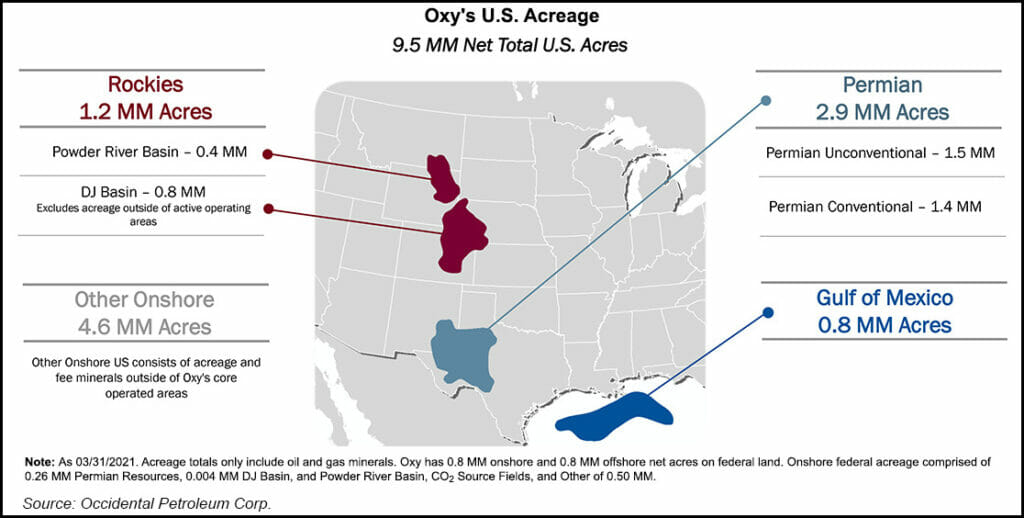 Oxy, as it is better known, issued its second quarter results on Wednesday. The Houston-based independent posted solid results across its U.S. and international holdings, with stronger profits and improved efficiencies.

Several analysts, though, were keen to hear more about a project that has yet to break ground. Oxy in February pulled the trigger for the first phase of front-end engineering design (FEED) to build what would be the world’s largest DAC, a CO2 capture project set for West Texas.

“The FEED study should be done, and we should have final investment decisions in the early part of next year,” Hollub said. “We hope to begin construction by the end of 2022 or beginning of 2023…It should be then online toward the end of 2023 or into 2024. It will be up and running certainly by 2024.”

If the project captures 1 mmty of CO2, that would be around 5% of what Oxy sequesters every year through its enhanced oil recovery (EOR) business, also centered in the Permian.

Oxy is partnering on the DAC facility with developer 1PointFive Inc. through Oxy Low Carbon Ventures LLC. Initial funding is from Rusheen Capital Management LLC. The unique technology was created by Carbon Engineering Ltd., in which Oxy is an equity owner.

Show Me The Money

The push now is to ensure the project has the “right funding” in place, Hollub said.

“We have multiple opportunities to bring in others who want to be a part of this,” including from United Airlines.

United last December said it was making a multi-million dollar investment in 1PointFive. United officials, who didn’t provide a specific investment figure, said the carbon capture system was one of the few ways available today to adequately capture aircraft emissions. The Permian project could offset nearly 10% of United’s annual emissions.

United “will be not only contributing to the capital needed to build it, but they will be taking the fuel from the facility,” Hollub told investors. “They are committing to an offtake of the low carbon fuel that will be provided by the CO2 that’s captured from the air.”

Questions still remain about the overall costs to build the facility. Financing overall has not been finalized, but Hollub said “there are multiple ways to fund it.

“One is to make investment in the facility itself. Second is to commit to taking the CO2 credits. Third is to commit to purchasing the oil that’s generated from the CO2 that goes into enhanced oil recovery.

“We’re working through that now and talking to a lot of interested parties. We should have more information on how we’re going to do that by early next year. But there’s definitely a lot of interest in making this happen.”

“It’s for the U.S. and for the world. Direct air capture needs to happen successfully and happen in a big way. And so that’s generating the interest in the parties that want to be contributing to it and then get to participate in the results of it.”

Output Up, Costs Down

“The ability of our oil and gas business to overcome challenges while increasing efficiencies has been transformational,” Hollub said during the conference call. “Looking back over the first six months of this year, we overcame the impacts of a major weather event and divested a producing asset.”

The strength in operations has led Oxy to increase full-year production guidance for continuing operations to 1.15 million boe/d. Oxy is now planning to drill 27 more Permian wells this year because of efficiency gains, even as capital expenditures remain unchanged.

Hollub highlighted performance from the Permian’s Delaware sub-basin of West Texas, where the Silvertip development was recently brought online. Silvertip “is producing approximately 20% more oil compared to a prior development in this area,” she said. “Additionally, in an area roughly 10 miles southeast of Silvertip, we brought online a five-well development with average 30-day peak rates of almost 5,000 boe/d…

“Operationally, our teams continue to set new efficiency records while constantly pursuing opportunities to improve. We set new quarterly records across our portfolio on feet drilled and hours pumped in a single day.”

In the Permian’s Midland sub-basin, Oxy set a drilling record during 2Q2021 with more than 9,500 feet drilled in 24 hours. That led to a “spud-to-rig-release record, drilling a 10,000-foot horizontal well in only eight days,” Hollub said.

Colorado’s Denver-Julesburg Basin also saw records broken, with more than 23 hours pumped in a single day, she noted. Meanwhile, in the Gulf of Mexico, “we have significantly lowered drilling cost and duration, as the wells drilled in 2021 have cost 15% less than the average for 2019…We’ve had excellent results leveraging remote operations.”

Asked about bringing on partners in its developments, Hollub said that idea was always on the table. “For us, it’s not a matter of how you do it. We just look for ways to create value. And any way that we can create value for our shareholders, we’re open to doing it.”
She pointed to the joint venture (JV) in the Midland with Colombia’s Ecopetrol SA, which “has been very successful for us. We actually may look at additional JVs in the Delaware Basin to continue to accelerate what we’re doing there…”

Hollub said it was “going to be important that we change our paradigm about how business should be done…I think this sort of thing needs to happen and has to happen for us to maximize the value of the assets that we and others have today.”

Sales volumes in 2Q2021 came in at nearly 1.2 million boe/d, down 13.5% year/year on a decline in U.S. and international sales. Despite a decline, the company benefited from a global improvement in commodity prices.

The company generated $2 billion in free cash flow, the highest quarterly total since 2008. Global oil and gas revenues totaled $4.5 billion, up almost 121% year/year. Chemical revenues were up more than 40% year/year at $1.19 billion. Midstream & Marketing revenue increased by almost 144% to $497 million.