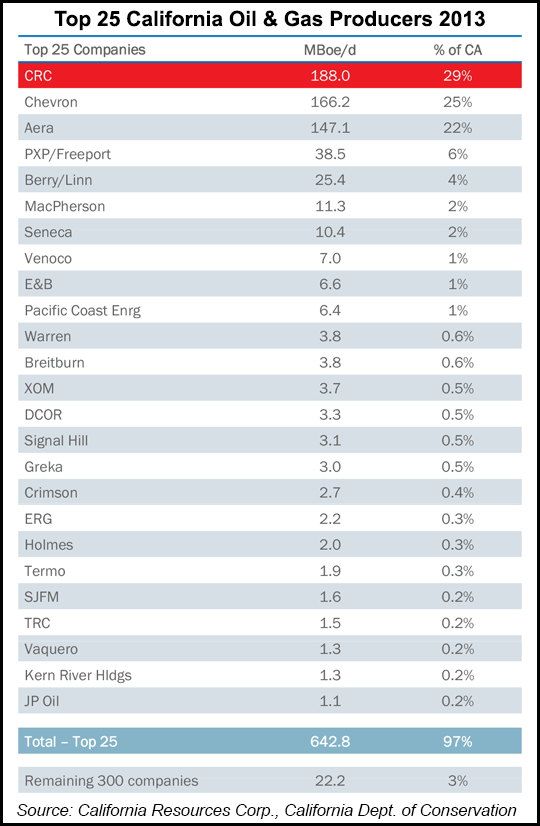 CRC will operate as an independent oil/natural gas exploration and production (E&P) company, as approved by the Oxy board in October (see Daily GPI, Oct. 3) and announced early this year by Oxy CEO Stephen Chazen (see Daily GPI, Feb. 14).

“We spent more than 15 years building a California company, and we expect it to provide significant value to CRC stockholders,” Chazen said Monday. “The steps we have taken during our strategic review will result in a greater ability to concentrate Oxy’s resources in areas where we have key competitive advantages.”

The spin-off was made effective Sunday through the distribution of 80.5% of the outstanding shares of CRC to holders of Oxy’s common stock. Each Oxy shareholder received 0.4 shares of CRC common stock for every one share of Oxy common held at the close of business Nov. 17.

On that date, about 310 million shares were distributed, with Oxy retaining 71.5 million CRC shares.

When Oxy’s board formally OK’d the separation in early October, CRC was projected to have nearly 1,200 development wells this year and its 2014 capital spending program was estimated at $2.1 billion. “CRC will be California’s largest natural gas producer and the largest oil/gas producer on a gross-operated barrels of oil equivalent basis,” the company said.

Last year, Chazen began talking up the spin-off, saying that “creating two separate energy companies would result in more focused businesses that will be competitive industry leaders.” Chazen was tapped to head the effort to separate last year (see Daily GPI, May 6, 2013).