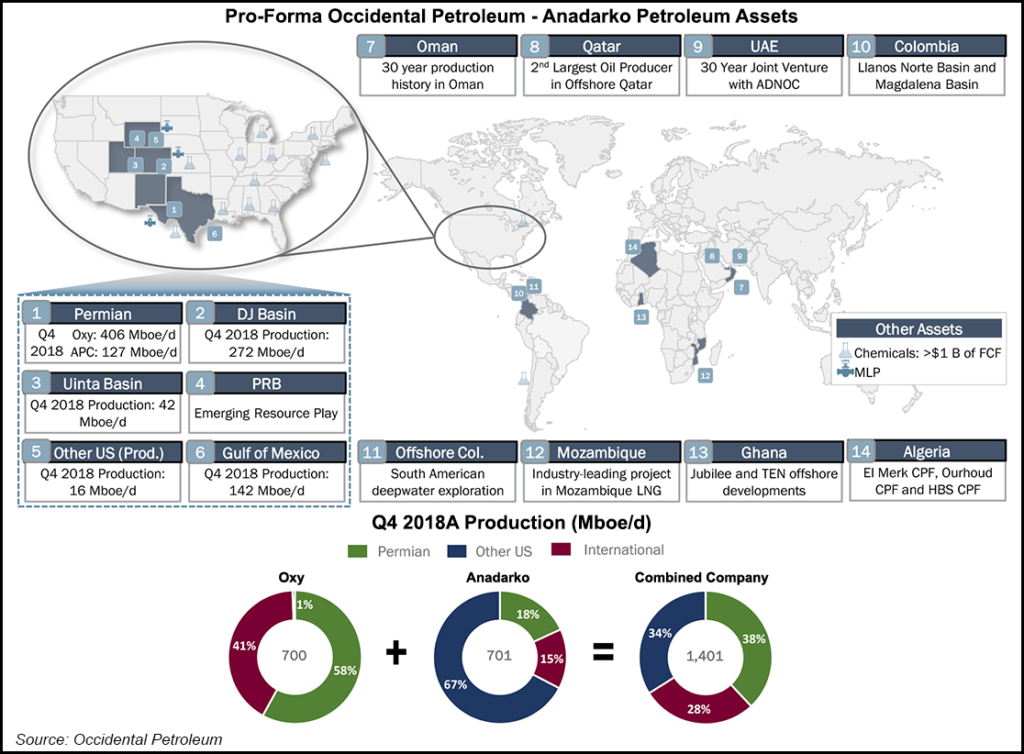 Oxy CEO Vicki Hollub has maintained since the initial bids last month that the Permian Basin leasehold held by Anadarko was the lynchpin of the deal.

“This exciting transaction will create a global energy leader with a world-class portfolio, proven operational capabilities and industry leading free cash flow metrics,” said Hollub. “This transaction further establishes Occidental as a premier operator in prolific global oil and gas regions with the ability to deliver production growth of 5% through investment in projects with industry leading returns.

“With greater scale, an unwavering focus on driving profitable growth, and our commitment to growing our dividend, we are creating a unique platform to drive meaningful shareholder value.”

While there were no expectations as of Friday that the deal would not be consummated, Oxy management was expected to take some heat at the annual shareholder meeting as the deal will sharply increase its debt, increasing the urgency to unload a lot of assets

Oxy plans to off some of Anadarko’s portfolio, which stretches into the deepwater Gulf of Mexico and across the Denver-Julesburg Basin, two regions where Anadarko long has been a leading producer. In addition, Oxy is selling off some of the global assets, including Anadarko’s estimable African portfolio, which includes a liquefied natural gas (LNG) export project in pre-development in Mozambique.

Oxy has an agreement to sell the African assets, including Mozambique LNG, for $8.8 billion to French supermajor Total SA. Total is second only to Royal Dutch Shell plc for private LNG sales worldwide.

The overall purchase is being completed via a combination of cash, debt and equity financing, including proceeds from a $10 billion equity investment by Berkshire Hathaway Inc. The transaction is not subject to a financing condition.

“Occidental is confident in its ability to realize the full potential of the transaction while maintaining a strong balance sheet, investment grade credit rating and its current dividend,” management said. The operator expects to reduce debt over the next two years “through free cash flow growth, realizing identified synergies and executing a planned portfolio optimization strategy with $10-15 billion of divestitures over the next 12-24 months,” including the Total agreement.

The acquisition of Anadarko has been unanimously approved by each board. Anadarko board members also have recommended shareholders approve the merger.

If all goes to plan, the transaction could be completed before the end of the year.

Bank of America Merrill Lynch and Citi are acting as Oxy’s financial advisers, while Cravath, Swaine & Moore LLP is serving as legal counsel.