A unit of Occidental Petroleum Corp. (Oxy) is partnering in a pilot project that could produce 1 metric tons/month of ethylene using human-made carbon dioxide (CO2) instead of hydrocarbon feedstocks like natural gas and oil. 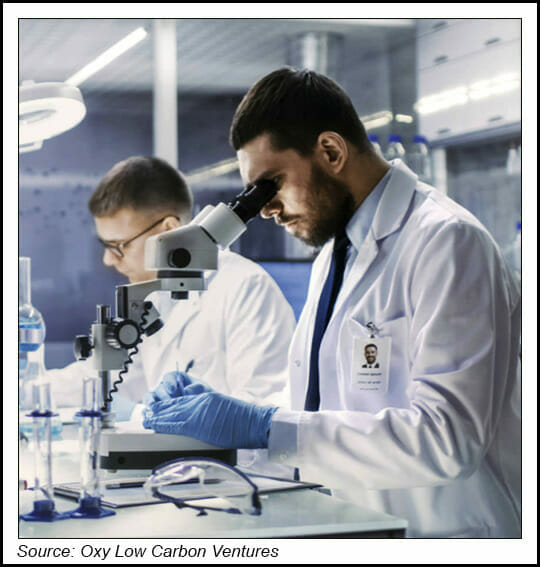 Houston-based Cemvita Factory, a bio-engineering start-up, is working with Oxy Low Carbon Ventures (OLCV) on the bio-ethylene pilot facility, which could be up and running in 2022. The test facility would rely on a process developed by the partners in laboratory tests. Initial testing indicated the facility could be competitive with hydrocarbon-sourced ethylene processes.

Also likely to benefit is Oxy’s petrochemical affiliate OxyChem, “which is a large producer and consumer of ethylene in its chlorovinyls business,” Zeller noted.

Bio-ethylene is produced from bio-ethanol, which in turn is created by photosynthesizing CO2 from sugarcane, noted Cemvita CEO Moji Karimi, who co-founded the company.

“Our bio-synthetic process simply requires CO2, water and light to produce bio-ethylene, and that’s why it saves a lot of cost and carbon emissions,” Karimi said. Cemvita “is applying industrial-strength synthetic biology to help our clients lower their carbon footprint while creating new revenue streams.”

Cemvita co-founder Tara Karimi, chief technology officer said, “Nature provided the inspiration. We took a gene from a banana and genetically engineered it into our CO2-utilizing host microorganism. We are now significantly increasing its productivity with the goal to achieve commercial metrics that we have defined alongside OLCV.”

Two years ago, OLCV invested in Cemvita to jointly explore how synthetic biology could be used to bio-manufacture OxyChem products. The Oxy unit invests in developing low-carbon fuels and products, as well as sequestration services to support carbon capture projects globally.

The Houston-based operator is working on several carbon capture initiatives, including a massive project in the Permian Basin. In February, Australia’s Worley Ltd. was awarded the front-end engineering and design for the first of four phases of the direct air capture facility planned for West Texas.

The Permian facility, capable of extracting 1 million metric tons/year of atmospheric CO2, could begin construction in 2022, with the buildout likely to take up to two years.