Only months since it was spun off from Occidental Petroleum Corp. (Oxy), California Resources Corp. (CRC) slashed its operations and capital spending program for 2015 in response to red ink in its first quarterly earnings report. 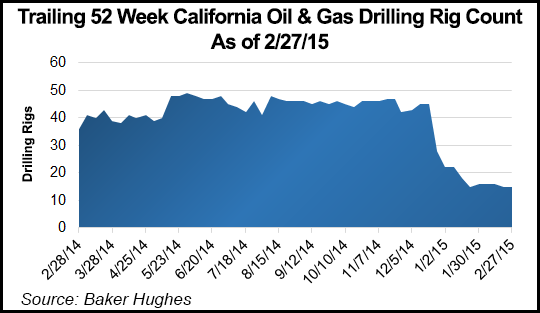 While reporting record quarterly production and reserves growth last year, CEO Todd Stevens said CRC’s 4Q2014 results showed a $2.1 billion loss ($5.47/share), compared with net income of $212 million (55 cents) for the same period in 2013, and the red ink reflected a “softening of [oil] prices that accelerated during the quarter.”

The loss was driven by an after-tax impairment charge of $2 billion ($3.4 billion before taxes) that was almost entirely due to the crude oil price nosedive, Stevens told analysts on a conference call Feb. 19.

Vowing to “live within our means,” CRC officials have slashed their rig count from 27 in November to six at year-end 2014, and work-over rigs have been reduced from 47 at the beginning of last year to 33 currently, Stevens said. This year, he plans to have only three rigs active, focusing primarily on CRC’s long-established steam flood and water flood activities.

Capital investments will be cut 75% this year to $400-450 million. Last year’s capex budget was $2.1 billion. The revised spending level is based on $60/bbl Brent oil prices, he said, and if the prices move substantially one way or the other, “we will adjust our spending accordingly.”

“The emphasis in 2015 will be on steam and water flood projects that offer a lower decline rate and lower risk profile,” Stevens said. While he still expects 2015 oil production to increase, natural gas and natural gas liquids production will continue to decline as it did last year. Lower gas prices have the advantage of helping reduce the cost of the steam flood operations that rely on huge amounts of gas-fired steam, he said. Overall production this year should still hit close to 165,000 boe/d, the record level achieved in 2014.

The other area that CRC will needs to address this year is lowering overall debt, which was boosted considerably last year by its need to take more than $5 billion in long-term debt to pay off Occidental at the time of the spinoff’s closing. Stevens places extra importance on cutting debt, considering that a return to “$100/bbl oil is still far away. We’ll look to de-leverage more than we look to grow in the near-term, at least.”

Stevens said when CRC was spun off by Oxy it had “an appropriate capital structure for the environment, but that environment deteriorated very rapidly. Our structure was not built for a $50/bbl oil price.”