Occidental Petroleum Corp. (Oxy) on Sunday substantially increased its offer to take over Anadarko Petroleum Corp., and if completed, it already has an agreement in hand with Total SA to sell $8.8 billion of natural gas-rich African assets, including Anadarko’s proposed export project in Mozambique. 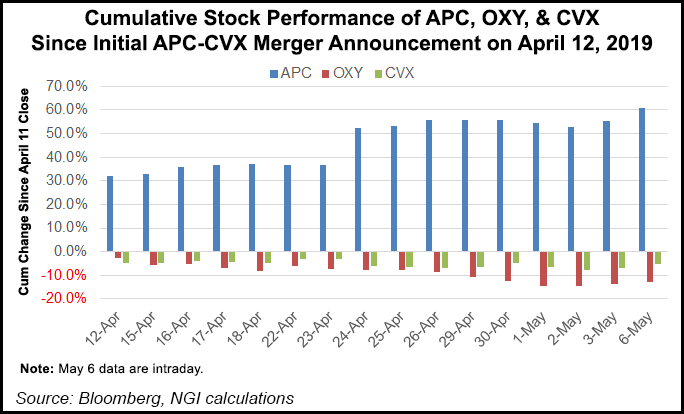 The revised proposal, unanimously approved by the Oxy board, “represents an estimated premium of 23.3%” to Chevron’s pending offer estimated to be worth around $61.62/share as of market close on Friday (May 3), Hollub noted. Chevron’s deal now is structured 50-50 cash/debt.

“We firmly believe that Occidental is uniquely positioned to drive significant value and growth from Anadarko’s highly complementary asset portfolio,” Hollub said. “This combination will create a global energy leader with the scale and geographic diversification to drive compelling returns to the shareholders of both companies.”

“The financial support of Berkshire Hathaway as well as the agreement we announced with Total allows us to delever our balance sheet while focusing our integration efforts on the assets that will provide the most value for us,” Hollub said.

“Our revised proposal does not require an Occidental shareholder vote, which has been repeatedly cited as the explanation for why you previously chose Chevron’s $65 offer over our $76 offer,” Hollub wrote to the Anadarko board. “Our revised proposal and merger agreement represents our comprehensive response to all points that your counsel has raised with ours over the course of the past week.”

Anadarko counsel last Thursday had requested three seats on the Oxy board.

“We believe our revised proposal, which is 78% cash, does not support this and therefore we have not included such a provision,” Hollub said. Anadarko’s definitive agreement with Chevron includes a $1 billion breakup fee.

“The $1 billion breakup fee that resulted from your decision to select a $65 merger rather than the $76 per share we offered three weeks ago, will be borne by Occidental once we acquire Anadarko,” Hollub wrote.

Oxy expects to be in a position to complete the transaction before the end of the year, she said.

“We remain perplexed at your apparent resistance to obtaining far more value for Anadarko shareholders, which has been expressed clearly through our interactions over the last week,” Hollub told the Anadarko board. “We hope we can execute this merger agreement without delay and proceed to bringing this exciting combination to fruition.”

Anadarko said it had received the offer and would “carefully review” it to decide what course of action would be in the stockholders’ best interests. “The Chevron merger agreement remains in effect and accordingly, the Anadarko board reaffirms its existing recommendation of the transaction with Chevron at this time.”

Meanwhile, under a binding agreement also reached over the weekend, Total would buy Anadarko’s Algeria, Ghana, Mozambique and South Africa assets if the Oxy merger is completed. Included would be Anadarko’s proposed liquefied natural gas (LNG) project in Mozambique, which is due to be sanctioned this year. The binding agreement with Total could be completed in 2020.

In Algeria, Total would gain a 24.5% participating interest and operatorship of blocks 404a and 208 in the Berkine Basin in which it already owns 12.25%. The fields represented gross production of 320,000 boe/d last year. Total also would gain a 27% stake in the Jubilee field in Ghana along with a 19% participating interest in the 10 fields, which altogether last year produced 143,000 b/d. The South Africa purchase includes exploration licenses close to Total’s recent Brulpadda discovery.

Overall, the Anadarko assets represent around 1.2 billion boe of proved and probable, or 2P reserves, 70% weighted to natural gas, and 2 billion boe of long-term gas resources in Mozambique, Total noted. Equity production last year totaled 96,000 boe/d and is expected to grow to around 160,000 boe/d by 2025.

“If completed, the acquisition of Anadarko by Occidental offers us the opportunity to acquire a world-class portfolio of assets in Africa, further enhancing our position as the leading international oil company on the continent,” Total CEO Patrick Pouyanne said. Total is the second largest private LNG player after Royal Dutch Shell plc.

“We would be able to leverage our expertise in LNG by operating a major project in Mozambique and in deepwater in Ghana, and we would become operator of major Algerian oil assets where we are already a partner,” Pouyanne said.

The proposed transaction “is a win/win for Total and Occidental,” he said. “Total would get access to around over 3 billion boe of resources and Occidental would be able to strengthen its post completion balance sheet by monetizing immediately the international assets of Anadarko.”

Despite the capital investment in Mozambique LNG, Total expects the acquisition to be free cash flow (FCF) positive from 2020, even at a Brent price of less than $50/bbl, and it would generate more than $1 billion/year of FCF “from 2025 onwards after start-up of Mozambique LNG.”

If Total were to obtain Anadarko’s gas-rich assets, it would “comfortably be the second largest IOC LNG seller after Shell and the fourth largest LNG seller after Qatargas, Shell and Petronas,” Wood Mackenzie research director Nicolas Browne said.

“The potential acquisition of Anadarko’s stake in Mozambique LNG is representative of Total’s ambitious and aggressive expansion of its LNG position,” he said. Total acquired Engie’s LNG business last year “and has a plethora” of development opportunities to sanction within the next two years.

Total also is “seeking to participate in the Qatari megatrain expansion,” Browne said. In addition, the producer has signed a preliminary contract for LNG from Energia Costa Azul in Mexico.

The French supermajor “is entering a phase of strong cash flow growth,” Browne said. “As such, we still expect Total to keep strict investment criteria in terms of deciding which LNG project goes ahead. Its focus on LNG investment is part of a wider company shift to ”cleaner fuels’. The group views its LNG portfolio as long term in nature, as a facilitator for monetizing its own molecules, but has also become more active as an LNG trader in recent years.”