Denver-based Ovintiv Inc. streamlined the business during 1Q2021 to focus only on the Anadarko, Montney and Permian basins as it eyes slashing debt to appease restless investors. 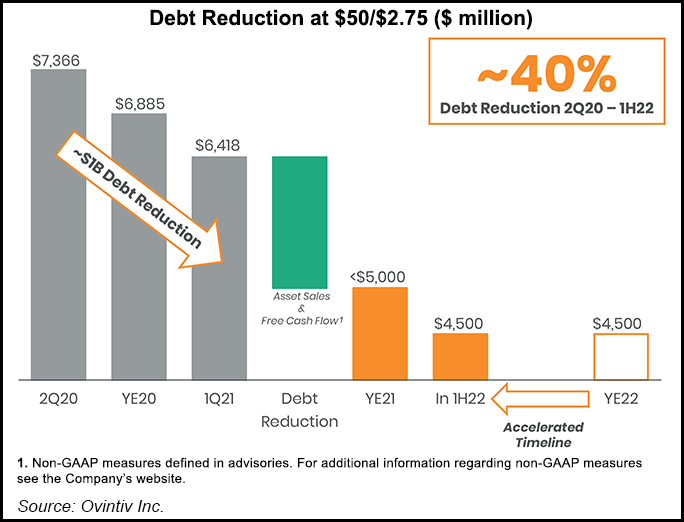 With long-held but neglected shale properties in Canada’s Duvernay and the South Texas Eagle Ford sold off, the independent has accelerated a $4.5 billion total debt target timeline to the first half of 2022, CEO Doug Suttles said during the quarterly conference call.

Under pressure from activist investors to improve financial and environmental performance, the Eagle Ford assets were sold for $880 million and the Duvernay properties were dropped for $263 million.

“Our progress is evident across the business but highlighted by the fact we’ve reduced total debt by almost $1 billion in the last three quarters. 2021 is expected to be our fourth consecutive year of free cash flow generation.”

There was a glitch with Winter Storm Uri, which disrupted operations in the Lower 48 during February. However, “our operating team kept production online longer and brought it back sooner than many of our peers. In addition, our multi-basin portfolio minimized impacts.”

The overall better pricing complemented a reduction in total operating expenses, which fell to $1.64 billion from $1.88 billion.

COO Greg Givens told analysts the “recovery in the global economy has led to increased demand for fuel, as well as other raw materials. And as a result, we did see modest cost inflation during the quarter on commodities like diesel and steel.”

However, Ovintiv’s centralized supply chain management team “anticipated these cost increases. Their efforts in procurement and contracting, along with operational efficiencies in the field, allowed us to fully mitigate the impact of cost inflation during the quarter.”
The year-to-date costs in the Anadarko, Montney and Permian “were either in line with or below our full-year targets,” Givens said. “These costs are roughly 12% lower compared to 2020. Despite continued pressure on select items, we fully expect to meet or beat our capital guidance of $1.5 billion for the year.”

What provided Ovintiv with a solid performance was its ability to slash costs and time in the drilling and completions (D&C) programs. Ovintiv has stepped up the use of simulated fracturing completions, aka Simul-Fracs, which allow two wells to be fractured at the same time using a single spread.

For example, a pacesetter well in the Permian using Simul-Fracs was finished in under seven days for spud-to-rig release time, Givens noted. In Oklahoma, D&C costs in the STACK, aka the Sooner Trend of the Anadarko basin mostly in Canadian and Kingfisher counties, averaged $440/foot. Costs in the STACK were around 4% lower than full-year 2021 guidance and down 8% from 2020. The STACK team also achieved a record operational quarter using Simul-Fracs, with a nine-day average spud-to-rig release time and a 6.2-day pacesetter well.

In another area of the Anadarko, the South Central Oklahoma Oil Province, aka SCOOP, “we brought on five Springer wells in the quarter with average D&C cost of $5.2 million per well with oil performance exceeding type-curve expectations,” Givens said.

Meanwhile, Montney D&C costs averaged $380/foot, or 16% below the 2020 program average. About 80% of the Montney wells were completed using Simul-Frac technology, Givens said. “Today we are not only developing our acreage with longer laterals, but we are doing so in a significantly shorter amount of time.”

Ovintiv also has some assets in the Bakken Shale, where two net wells were drilled that are expected to be TIL before the end of June.

A West Texas wet sand facility in Howard County also started up in the first quarter, and it has proved to be a positive for the Permian operations.

“With this mine, our world-class supply chain management and operations teams have secured a low-cost and low-risk source of sand in the Permian without using our capital,” Givens said. “We have exclusive rights to the mine, which is expected to supply sand to about two-thirds of our Permian operations. This will reduce our exposure to inflationary pressures and lower our completion costs.”

Ovintiv can source sand from the mine at under 2 cents/per pound, he noted.

“That translates to roughly $100,000 of savings per well in the Permian. There are also significant environmental and logistical advantages. We expect the mine will reduce our annual truck mileage in Howard County by about 80%.” In addition, the mine should reduce carbon dioxide emissions “by about 200 tons per well. We are continually pursuing efficiency initiatives like this throughout our operations.”

President Brendan McCracken shared how the company works to “unleash innovation and technology” to improve efficiencies. “Our supply chain management team is harnessing data analytics and machine learning. This approach streamlines our back-office work, but it also gives our team direct visibility into pricing for comparable products and services across our portfolio, allowing our team to drive down costs.”

“This translates to fewer days on location and more effective completions, driving lower cost and better wells. And our production operations teams are using cloud-based technology to optimize chemical pump rates and gas lift compression.” Each innovation “plays a role and in combination, they add up to meaningful value.”

Ovintiv is targeting a 33% methane intensity reduction by 2025. The target is linked to the compensation for all employees. Flared and vented gas was less than 0.40% of total sales volumes during the first quarter, down from 0.5% in the 4Q2020.