Under pressure to reduce debt and simplify operations, Denver-based Ovintiv Inc. is set to exit the Eagle Ford Shale in a deal with  privately held Validus Energy for $880 million. 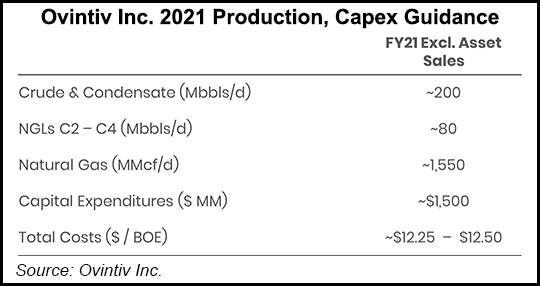 Predecessor Encana Corp. paid $3.1 billion for the assets in 2014 in a deal with Freeport McMoRan Copper & Gold Inc. Proceeds are to be used to reduce debt, CEO Doug Suttles said, with completion of the transaction set by the end of June.

Private equity-backed Validus, also based in Denver, is sponsored by Pontem Energy Capital and other investors. According to its website, Validus is aiming “to build and operate a large-scale portfolio of producing wells and drilling locations in the Eagle Ford Shale.” CEO Skye Callantine previously helmed Permian Basin operator Felix Energy LLC, which was sold to WPX Energy Inc.. WPX has since merged with Devon Energy Corp. Callantine is also a partner at Pontem.

Ovintiv, which recently agreed to sell some Duvernay Shale assets for $263 million, has been under pressure from activist investors to improve financial and environmental performance.

Ovintiv said the deal puts it on track to lower debt to under $5 billion by the end of the year with  a $4.5 billion debt target set to be reached in the first half of 2022.

Regarding the freezing weather during February, Ovintiv said Texas and Oklahoma production was “rapidly restored to full rates,” with some impacts on 1Q2021 output. Crude and condensate volumes are now expected to average 196,000-200,000 b/d with March output forecast to average more than 205,000 b/d. By comparison, the company produced an average of 215,000 b/d in 4Q2020, above guidance.

On the crude and condensate side, Ovintiv now expects to pump on average 190,000 b/d, compared with earlier projections of 200,000 b/d.

Tudor, Pickering, Holt & Co. had estimated the Eagle Ford assets currently had a value of around $800-900 million, while BMO Capital Markets projected their value at $700-800 million.