The overall U.S. rig count finished unchanged during the week ended Friday (Feb. 7) as an uptick in offshore activity offset a small drop in land drilling, according to the latest data from Baker Hughes Co. (BKR). 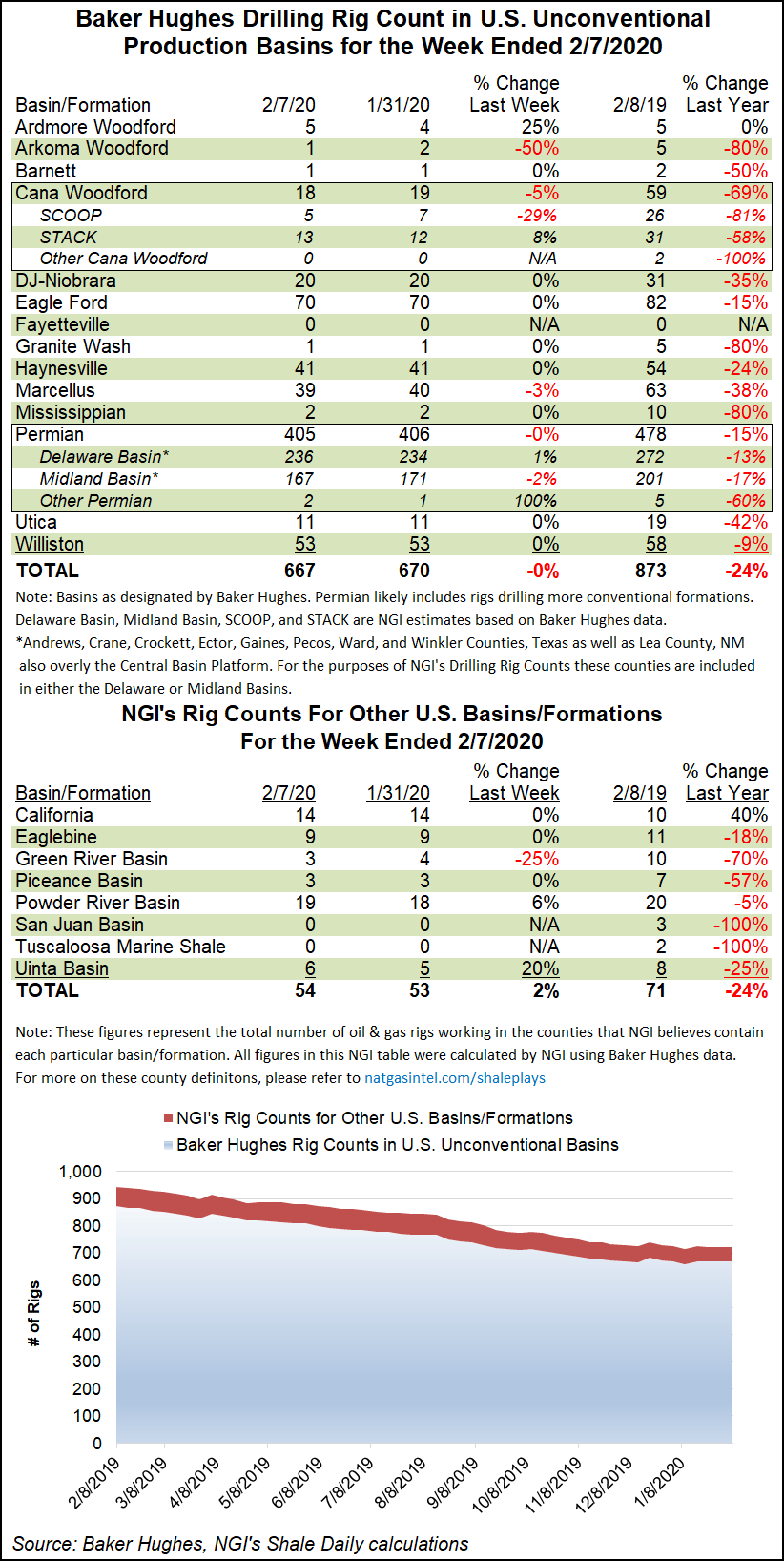 Total U.S. oil-directed rigs increased by one during the week, offsetting a one-rig decline in natural gas-directed activity. The combined domestic tally finished at 790, down from 1,049 in the year-ago period.

Land drilling in the United States decreased by one, and one rig exited from inland waters, according to BKR. The Gulf of Mexico added two rigs to its tally to reach 23 units, up from 19 at this time last year. One directional rig was added overall, offsetting the departure of one vertical rig.

Meanwhile, 10 rigs returned to action in Canada during the week, upping its total to 257, versus 240 in the year-ago period. The combined North American rig count ended the week at 1,047, versus 1,289 a year ago.

Among states, New Mexico added three rigs to grow its total to 112, up slightly from 111 rigs in the year-ago period. Oklahoma, meanwhile, dropped three units week/week to fall to 50 active rigs, less than half of the 120 rigs active at this time last year, according to BKR.

Also among states, Alaska and Utah each added a rig, while Texas and West Virginia each dropped one.

BKR also released its international rig count for January 2020 Friday, which totaled 1,078, down 26 rigs sequentially from the 1,104 rigs active in December 2019. The international count comprises Latin America, Europe, Africa, the Middle East and the Asia Pacific.

North American onshore activity took a nosedive late last year, pummeling revenue and profits for drilling stalwart Patterson-UTI Energy Inc. (PTEN), but the rig count appears to be rising, and opportunities are growing, particularly in dual-fuel operations, according to management.

The fourth quarter was unusually choppy, CEO Andy Hendricks said during a Thursday conference call. Operators dropped rigs early in the quarter, and then began calling for more equipment late in the year. The improved activity led to increased labor and maintenance costs.

Meanwhile, the continuing slump in North America’s onshore oil and gas activity in the onshore, combined with ongoing cost-cutting efforts, cut into the bottom line for National Oilwell Varco Inc. (NOV) during the fourth quarter, but the growing offshore and international business eased some of the pain.

During a conference call Friday morning, CEO Clay Williams credited the organization with executing well in a “challenging market during 2019,” by implementing cost savings and efficiencies.

“Thanks to their efforts, we were able to significantly improve cash flow and strengthen our balance sheet, despite the financial charges that were necessary through the year.”

The fourth quarter provided “continued improvements in international and offshore markets, partially offset by another sequential decline in spending by our customers in North America.”