A ban on hydraulic fracturing, a key technique used to complete unconventional oil and natural gas wells, could reverse U.S. production growth and lead the country backwards to become a net importer once again by as soon as 2025, the outgoing Trump administration warned in a report issued Thursday. 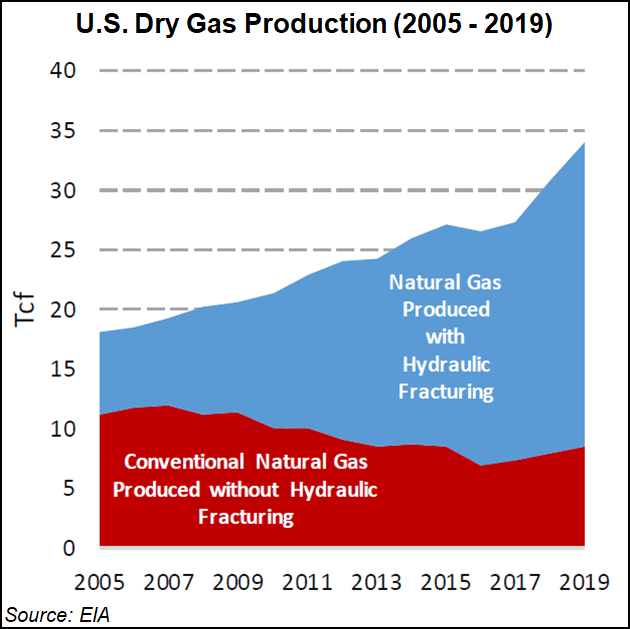 The Department of Energy’s (DOE) outgoing Secretary Dan Brouillette in an 80-page analysis said if the completions technique known as fracking were not allowed to continue, it could sharply fray domestic output.

The DOE analysis “suggests natural gas price implications under a hydraulic fracturing ban would be considerable, with an estimated 244% increase from the 2019 level, reaching $8.80/MMBtu by 2025,” Brouilette said.

The Trump administration had requested the analysis in October in the heat of the presidential campaign. Before his election, President-elect Biden repeatedly asserted that he would not impose a blanket ban on fracking, but he has suggested limits may be eyed to drill on federal lands.

Banning the completions process, which has been used for more than 50 years around the world, “would result in the loss of millions of jobs, price spikes at the gasoline pump and higher electricity costs for all Americans.

“Such a ban would eliminate the United States’ status as the top oil and gas producing country and return us to being a net importer of oil and gas by 2025,” he said. “It would weaken America’s geopolitical standing and negatively impact our national security.”

Natural gas is an “important partner” for renewables and provides baseload power to backup intermittent resources such as wind and solar, according to the report. Renewable energy technology growth could be “adversely” impacted and in turn potentially impact the U.S. power grid.

The DOE detailed a litany of damage to the U.S. economy with a ban on fracking. By 2025, it said, the domestic economy “would have 7.7 million fewer jobs, $1.1 trillion less in gross domestic product, and $950 billion less in labor income.” A recovery from the Covid-19 pandemic also could take longer, according to the analysis.

Among other things, there could be a near $2/gallon increase in gasoline prices by 2025 from the 2020 average of $2.18. Average diesel prices also are forecast to increase.

“Banning hydraulic fracturing would reverse course of American’s ongoing global environmental leadership by increasing greenhouse gas emissions while burdening struggling consumers with higher energy costs,” he said. “In addition, it would further harm our economy with significant job loss and threaten national security, as clearly laid out in this report and many others.