Analysts and oil and gas experts agree that the waning days of the Obama administration will be challenging ones for the industry, as an “unprecedented” list of proposed regulations that could impact the industry for years to come slowly advance through the rulemaking process. 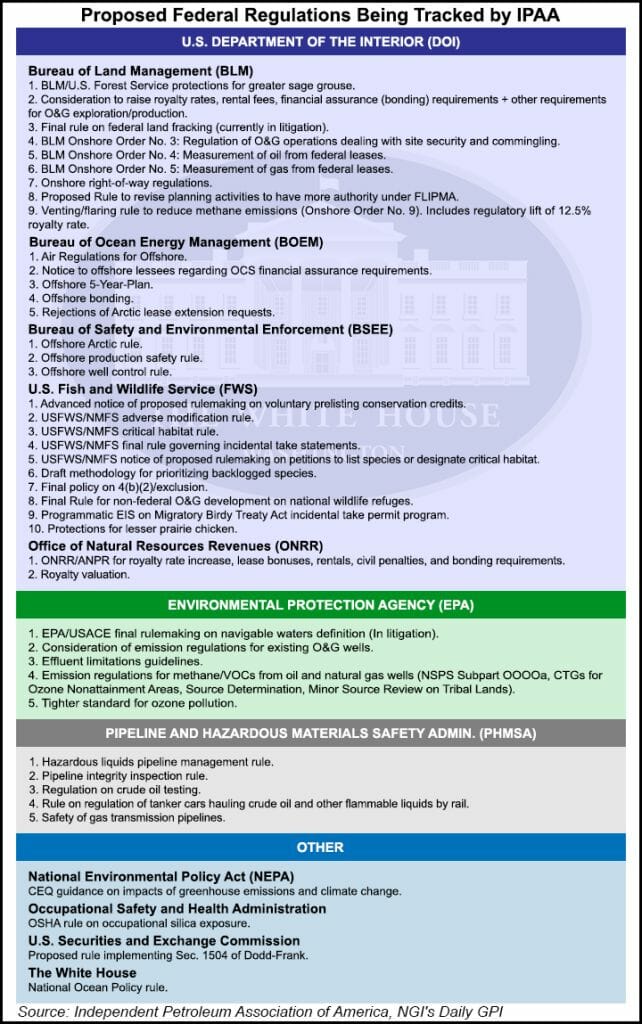 Earlier this year, as February transitioned to March, the Independent Petroleum Association of America (IPAA) hosted a Congressional Call-Up meeting in Washington, DC. There, they presented attendees with a list of more than 40 regulations proposed by the federal government that the IPAA said it was tracking.

More than half of the proposed rules being tracked by the IPAA are from the Department of Interior (DOI) and its agencies, but the Transportation Department’s Pipeline and Hazardous Materials Safety Administration (PHMSA) and the U.S. Environmental Protection Agency (EPA) are also in the mix.

According to the IPAA, the most critical issue to the industry is a proposal by the DOI’s Bureau of Land Management (BLM) to govern hydraulic fracturing (fracking) on public and tribal lands (see Shale Daily, March 20, 2015). Attorneys representing the IPAA, the Western Energy Alliance, four states — Colorado, North Dakota, Utah and Wyoming — and the Ute Indian Tribe of the Uintah and Ouray Reservation have challenged the rule in court (see Shale Daily, March 22).

“Obviously the fracking rule is our key priority right now,” IPAA spokesman Neal Kirby told NGI. “That’s still going forward in the courts right now. A number of the other rules could potentially impact our businesses. For the smaller independents — which average 12-15 employees in their offices — these rules compounding on top of each other is just going to make it even more difficult for them to stay in business.”

Dan Naatz, IPAA’s senior vice president for government relations and political affairs, concurred. He said the court fight over the aforementioned BLM rule represents “the future of fracking. We all view it as really important, because the federal government is trying to put in a one-size-fits-all rule that we just don’t think makes any sense, and could have ramifications for a lot of non-federal land.”

According to Naatz, a close second in order of regulatory importance would be the EPA’s proposed rule governing methane emissions (see Daily GPI, Aug. 18, 2015; Jan. 14, 2015). The proposal would require the industry to find and repair methane leaks and limit emissions from both new and modified sources, including pumps and compressor stations.

“The narrative that you’re getting out of there is this push on methane,” Naatz said. “First of all, we believe we have a very good answer for this, which is that the industry is working hard on it. But secondly, in a lot of areas, the BLM needs to expedite pipelines and work to get additional rights-of-way and capacity approved. Keep in mind that our producers don’t want to vent or flare, either.

“We understand how important the return to the taxpayer is, and we think there are other solutions to this issue, but I think it all points to the [environmentalist] narrative of ‘keeping it in the ground.’ That’s what we’re seeing from this administration, and it shows itself most clearly in the methane rules that are coming from the EPA, the BLM and now also the offshore agencies.”

It’s a far cry from President Obama’s State of the Union speech in January 2014, when he praised the emergence of oil and gas development in the United States as supporting national security, and touted natural gas as a “bridge fuel” to the future (see Daily GPI, Jan. 29, 2014).

“This is not only a ‘bridge fuel’ question, but if you look at the renaissance that’s happened it’s been great for the United States not only with energy security, but we have also reduced our emissions. It’s a great achievement, and we think we can do more. We think if you increase pipeline capacity and did some other things you would get even greater reductions. We have always argued that we’re part of the solution. We’re not the only answer, but we’re certainly an important part of the discussion.

“The administration seems to have gone in a completely different direction. That’s unfortunate, and that’s the battle we see shaping up” before Obama’s term ends in January 2017.

Naatz added that the administration’s shift in thinking could also be tied to Obama looking to cement a legacy of having cared about environmental issues. “Every president, both Republican and Democrat, worries about their legacy,” he said. “They want to be able to say ‘this is what I said was going to happen, and this what happened.’ Certainly for this president, climate change and the environment have been at the top of his list the whole time.”

Administration Has ‘Taken Off The Gloves’

Although every lame duck presidential administration tries to usher in new regulations before leaving office, Gary Slagel, government relations coordinator for the law firm Steptoe & Johnson PLLC, called the current list “unprecedented, in terms of the number of efforts that they’ve undertaken here and what the intent seems to be.

“I think among the industry we’ve all been scratching our heads, wondering how we can have a positive energy policy moving forward in this country — one that recognizes the benefits associated with greater utilization of natural gas — and at the same time be doing so many of these things that clearly are going to frustrate efforts to further develop and/or use the resource,” Slagel said.

Although Slagel conceded that he is primarily focused on issues in the onshore Appalachian Basin, he called the EPA’s proposals covering air and water issues the most damaging to the industry, including changes to the federal Clean Power Plan (CPP) and the Clean Water Act (see Daily GPI,Aug. 3, 2015; Shale Daily, May 27, 2015). Also troubling: PHMSA’s proposal to add thousands of miles of gathering lines to its purview (see Daily GPI, March 21).

“What PHMSA is doing with regard to Class 1 lines will likely impact the conventional industry, but it will even affect the unconventional guys who’ve been putting lines in the ground for 10 years here in the Appalachian Basin,” Slagel said. “Depending on how that rule is worded, there could be some retroactive applications attached to this rulemaking that would be very problematic for even the unconventional producers.”

Slagel added that he didn’t want to downplay proposals by the DOI’s Fish and Wildlife Service. “They all have a significant impact on making decisions as it relates to the siting and location of pipelines and drill sites,” he said. “Those could have a very significant impact moving forward on some of those statements. The critical habitat rule and some of the other things going forward could still be problematic for the industry.”

Naatz said it is typical for government agencies or their secretaries to pursue some level of regulatory action in the closing months of an administration, and secretaries sometimes have some level of discretion. But through its channels to the various agencies, the IPAA has learned that this time around is different.

“We’re seeing more and more that the White House is telling the agencies — EPA, BLM, the offshore agencies — certainly on methane, ‘get this done,'” Naatz said. “Whether they can achieve that or not, I don’t know.

“This is also why we’ve been talking to Congress. It’s not to be obstructive; it’s to ask some serious questions: What are you doing? What will be the impact on the economy? What will the impact be on jobs? What will all of this entail? Because the president will have you believe that you can go to a renewable economy overnight. And it’s just not going to happen, and so that’s one of our frustrations.”

Naatz said he didn’t have the data to back up Slagel’s claim that the number of rules that could impact the industry in the waning days of the Obama administration was “unprecedented,” but a gut feeling from 25 years of working on the issues reinforces that sentiment.

“I’ve talked to people who are either downtown or have been at the agencies a lot longer [than 25 years], and they have all said that this is as bad they’ve seen it,” Naatz said. “I’m not saying any administration winds down, but they start to focus on a few things. In this one, the White House seems to be expanding it. They’re throwing more things out there. Whether they think they can get them all done, I don’t know.

“There is a real sense that this administration is being aggressive on energy issues. They have really taken off the gloves, and I don’t think that is just a function of my imagination.”

Judging by the title of a nine-page report released last Wednesday by Standard & Poor’s (S&P) Ratings Services — “Even As The Obama Era Nears Its End, The EPA Isn’t Likely To Ease Back” — analysts seem to share that sentiment as well.

“During the Obama administration’s final year, it’s clear that the president’s opportunities to cement his legacy on environmental issues are becoming fewer, and the court system that once largely supported his rules has taken a turn against them,” wrote S&P analysts Michael Ferguson, Mike Llanos and Geoffrey Mrema. “Still, despite ongoing gridlock in Washington, the EPA continues to take on new tasks, and while the recent Supreme Court ruling may limit the agency’s focus on the CPP during the next year, its other efforts will go on.”

In a bit of good news, the analysts said they do not believe the EPA’s proposed methane regulations will affect the midstream sector’s credit quality.

“In our view, the EPA has been transparent in its efforts to reduce carbon emissions and air pollution from the oil and gas sector,” S&P said. “Thus, we believe a minimum level of investment has already occurred as companies have been proactive in managing the level of greenhouse gases they capture over the past few years. We believe most natural gas and natural gas liquid [NGL] gatherers would prefer for methane to stay in the gas stream, and in effect the pipeline, because they would receive an additional return on that product.

“On the other hand, if the underlying entity is an oil producer, the associated gases such as methane are an unwanted byproduct that would require a further investment to capture it when released. While the cost is uncertain at this point, we would expect companies to focus more on controls and monitoring their asset bases due to these regulations. We also believe these regulations may lead to opportunities for gathering companies to build additional infrastructure, though dependent on the potential return.”

The analysts added that despite oil and gas companies significantly cutting the capital programs over the last 12-18 months, they expect the sector to continue spending money on maintenance programs to reduce embarrassing risks associated with incidents such as the recent Aliso Canyon storage leaks in California (see Daily GPI, Nov. 12, 2015).