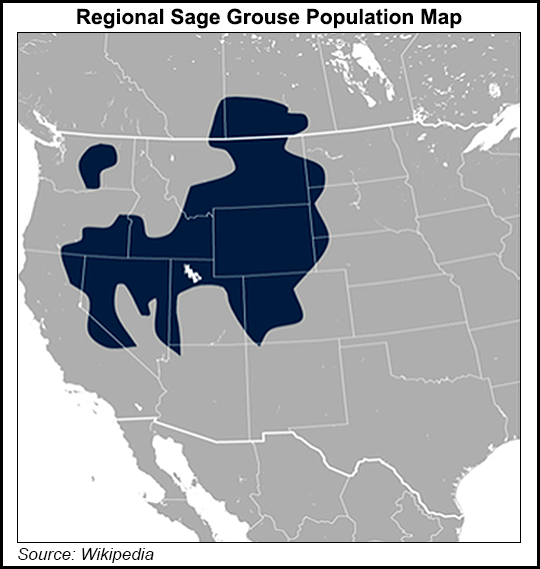 Referring to the Bureau of Land Management (BLM) declaration earlier in December, Hickenlooper said the directives are designed to preserve habitat not only for grouse but other wildlife. BLM has made “important clarifications” on how it plans to enforce state-required compensatory mitigation.

“Conservation of this species has been a priority for landowners, wildlife managers, ranchers, conservation groups, and state/federal agencies in Colorado for more than a decade,” Hickenlooper’s executive order stated.

The order would dictate future actions by the Colorado Department of Natural Resources (CNR) and the Colorado Oil and Gas Conservation Commission (COGCC) requiring them to apply their “full authority” to correct any adverse impacts on wildlife resources, including the greater sage grouse.

State agencies also were directed to continue supporting the Colorado Habitat Exchange to further on-the-ground voluntary conservation efforts, and the COGCC and the Parks and Wildlife division were directed to implement the findings of an internal review of its applicable rules.

The six-page order noted that Colorado habitat for the greater sage grouse covers 4.3 million acres, with about half managed by BLM and the rest a combination of state-managed and private lands.

States have maintained they are in a better position to manage sage grouse protections, and Hickenlooper took action early in 2015 in that regard. In September 2015 the U.S. Fish and Wildlife Service found that sage grouse did not warrant a listing as “threatened” or “endangered.”

“Since the 2015 ‘not warranted’ decision, Colorado and its primary stakeholders have maintained their commitment to conserve the greater sage grouse and implemented several measures,” Hickenlooper said.

The outgoing governor said his latest directive is compatible with the BLM’s latest instruction memorandum on compensatory mitigation.