The sponsor of a major natural gas export project on the West Coast has pulled a key permit related to construction activity in Oregon waters. 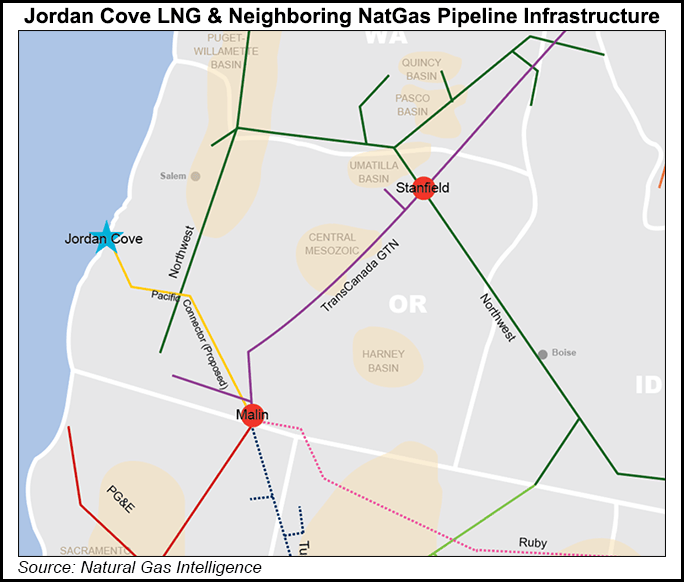 Pembina Pipeline Corp. on Thursday pulled the removal-fill permit filed at the Department of State Lands (DSL), two days after the agency denied a request to extend the decision time on the Jordan Cove liquefied natural gas (LNG) project to March 31. Instead, the DSL indicated it would stick to its timeline to issue a decision for the Coos Bay project by the end of this month.

In a letter to the DSL, Pembina said it appreciated “the effort the Department has expended in reviewing our application to date.”

Company spokesman Paul Vogel told NGI on Friday that Jordan Cove had notified DSL that it is not able to meet the agency’s requirements by the Jan. 31 decision date due to recently required additional information by other state agencies.

“These recent requirements from other agencies are impossible to finalize prior to DSL’s Jan. 31, 2020, decision date. DSL asserted they now require those filings to complete their removal-fill application, so an extension was necessary to comply with these new information requests, but was not granted,” Vogel said.

In its letter denying Pembina’s extension request, DSL said that it has “long worked with JCEP in establishing reasonable timelines for submission and review of the removal-fill permit application,” and has clearly and regularly communicated details regarding the remaining information needed. However, it “has not received timely and sufficient information to address all outstanding questions.”

Jordan Cove LNG requires a state permit to move materials in state waters during construction of the $6 billion terminal that could export up to 1.3 Bcf/d and the related 229-mile Pacific Connector transmission pipeline.

With Pembina pulling the permit, the future of the not-yet-sanctioned Jordan Cove LNG project becomes even murkier.

In November, FERC issued a final environmental impact statement (FEIS) that found many environmental impacts to construct and operate the project “would not be significant or would be reduced to less than significant levels” through mitigation measures, however, some impacts would be “adverse and significant.” Federal Energy Regulatory Commission staff recommended that impact avoidance, minimization and mitigation measures included in the FEIS be attached as conditions to any certificate issued by the Commission for the project.

Last summer, a coalition of 16 groups rallied in southern Oregon to demonstrate support for the export project. However, the project also has faced fierce opposition from environmental groups since it was proposed.

FERC rejected an application for the project in March 2016, citing problems with its Pacific Connector pipeline link to tap Western Canada and U.S. Rockies supplies, along with a lack of contracts from buyers. The application was refiled in September 2017.

With a glut of natural gas supply seen saturating global markets through at least the summer, the latest development is yet another hurdle in developing the Jordan Cove terminal. Having received all local land use permits, the next major milestone in the project’s regulatory process will be the final determination by FERC, which is set for Feb. 13, “at which time we will determine our path forward,” Vogel said.