An Oregon zoning appeals board’s support for a county pipeline permit denial will not stop Oregon LNG from pursuing its proposed liquefied natural gas (LNG) export terminal along the Columbia River and a connecting transmission gas pipeline, according to the project’s sponsors. 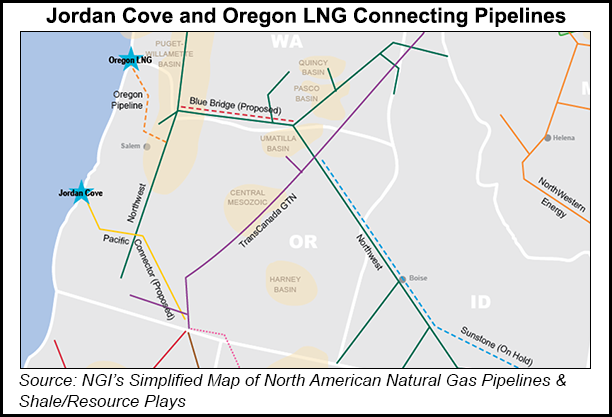 Permitting is moving forward on the federal level, they said, and the company has 21 days to decide if it wants to appeal to the Oregon Court of Appeals.

Clatsop County’s denial of the project’s proposed 41-mile gas transmission pipeline, which was upheld Wednesday by the Oregon Land Use Board of Appeals (LUBA), does not block the Federal Energy Regulatory Commission (FERC) and other federal agencies from moving the project ahead, according to Peter Hansen, project manager for Oregon LNG, a unit of New York City-based Leucadia National Corp. He said the decision on whether to appeal is pending.

A spokesperson for Columbia Riverkeeper, a critic of the proposed plant and pipeline (see Daily GPI, Dec. 24, 2014), told NGI that without “the critical land use permit” the pipeline (and thus, the project) cannot move forward. “State law prohibits the LNG company from securing state environmental permits or certifications without land use permits,” said Liz Terhaar, Columbia Riverkeeper communications director.

Hansen countered: “It absolutely does not. This is not the end of the process. Local permits are not required for the pipeline, and we expect to pursue the project regardless of this decision.” He is counting on federal law trumping state requirements, because LNG siting is under federal jurisdiction. Some state approvals are just “nice to have, but not essential,” Hansen said.

“The bottom line is that some of the state permits we need we’re getting without the state land-use permit, and others we may not get,” Hansen told NGI Wednesday. It all relates to the need for state permits in getting the federal Coastal Zone Management Act signoff, but Oregon LNG can appeal to the U.S. Commerce Department if Oregon continues to deny the land use appeal.

“We would appeal both the direct and indirect requirements for a local permit because the coastal zone act is clear; local permits are not required,” Hansen said. “It is a convoluted process and Oregon has made it more so, but at the end of the day, the Coastal Zone Act says that for energy projects of ‘greater than regional significance’ the implementation plan must have a state-based process for determining consistency [with the federal act] — not local.”

According to Hansen, the Commerce Department informed Oregon officials two years ago that local permits were not needed to designate Oregon LNG’s application complete.

Oregon LNG meets all the county’s requirements and the county commission’s earlier decision was simply based on an anti-fossil fuel agenda, Hansen said. “The LUBA decision was fully expected and does not change anything,” he said.

Hansen has consistently discounted local and state opposition to the project, which has faced pushback in Clatsop County for years (see Daily GPI, Oct. 14, 2013).

Environmental groups like Columbia Riverkeeper have opposed the LNG project since it was conceived as an import terminal a decade ago. Brett VandenHeuvel, executive director of Riverkeeper, called the latest move by LUBA “a significant turning point for LNG on the Columbia River. LNG development would take us in the wrong direction,” he said.

The battle between Oregon LNG and Clatsop officials dates back at least five years. The county commissioners approved the proposed pipeline’s consolidated land-use application in November 2010. But two months later the board, with three newly elected commissioners, voted to withdraw that approval. Following a lengthy legal process, the board formally rejected the application in October 2013.

Oregon LNG’s pipeline affiliate appealed the decision to LUBA, which ruled last June that former commissioner Peter Huhtala demonstrated bias when he voted for the 2011 withdrawal and the 2013 denial, directing the county to reconsider the application. Clatsop appealed LUBA’s ruling to the Oregon Court of Appeals and won, so it directed the state panel to examine the remainder of the pipeline’s petition.

Earlier this year, FERC delayed until June the completion of a draft environmental impact statement for the proposed Jordan Cove LNG export terminal and Pacific Connector transmission pipeline tying it to the western gas grid (see Daily GPI, Feb. 9). The U.S. Army Corp.s of Engineers is reviewing plans for the terminal along the south-central coast of Oregon in Coos Bay (see Daily GPI, March 9).