While the project sponsors were discounting it, at least one energy analyst has concluded that Oregon LNG’s proposed liquefied natural gas (LNG) export project along the Columbia River is headed into choppy waters since the state’s Court of Appeals earlier this month unanimously ruled in favor of a local county. 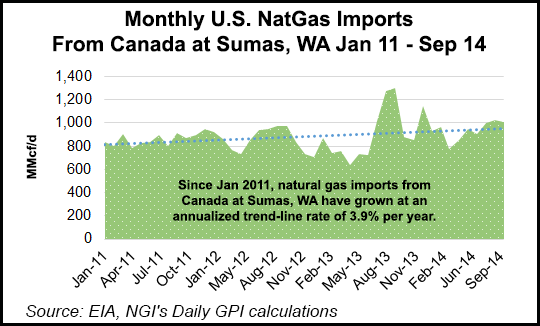 In a ClearView Energy Partners LLC research note on Dec. 23 titled Oregon LNG’s Local Permit Problems Pile Up, Managing Director Christi Tezak wrote that the court’s upholding of the Clatsop County board’s denial of a permit to Oregon LNG for part of a proposed gas transmission pipeline that would service the LNG facility “may bode well” for local governments and environmental groups that oppose the project.

“Local issues have plagued Oregon LNG for some time, and appear as significant obstacles to the project’s ability to construct the export facility,” the research note stated.

More than a year ago, the Clatsop County Commission voted 5-0 to reject a portion of Oregon LNG’s proposed 86-mile, 36-inch diameter pipeline running through the county (see Daily GPI, Oct. 14, 2013). Oregon LNG Project Manager Peter Hansen has consistently minimized the importance of the county’s OK, maintaining that his project can eventually move forward without it.

ClearView Energy Partners pointed out that the project sponsors sued the U.S. Army Corps of Engineers in August for access across an easement along the Port of Astoria that the Corps leases to dispose of dredge spoils, and the federal agency opposed Oregon LNG on the issue. In a filing earlier this month the company amended its complaint, but ClearView Energy Partners believes the Corps probably will oppose the latest filing.

“We do not need the Clatsop County permit,” Hansen said. “Having local permits is just one option for demonstrating consistency under the [federal] Coastal Zone Management Act — and it is not the only option,” Hansen told NGI. He said the Corps lawsuit has nothing to do with local permitting.

Nevertheless, ClearView Energy Partners concluded that neither the county board nor the Corps appear willing to “allow Oregon LNG to secure needed local approvals for the project as proposed.”

But Hansen countered that he already has access to the proposed site. “The Corps only has an easement, and the validity of that easement is the issue. It was issued [to the Corps] by the county in 1957 when Clatsop did not own the site.

“We consider the easement issue to simply be a title clean-up issue, and it is being managed by the title insurance company, which has accepted responsibility.”

In recent months, Oregon LNG and a second export project in the state, Jordan Cove, continued to push forward on all fronts — permitting and lining up buyers and sellers for their proposed export terminals (see Daily GPI, Nov. 4).

Much of the LNG from the proposed Oregon trains is earmarked to come from Western Canada, and imports into Northwest Pipeline at Sumas, WA, have shown steady growth over the last few years. Since January 2011, U.S. gas imports at Sumas have grown at an annualized rate of 3.9% per year.