The backer of a liquefied natural gas (LNG) receiving terminal on Oregon’s Columbia River said it will cost $4/MMBtu to land LNG on the West Coast. The gas supply will be more than welcomed by the market, according to speakers at a recent industry conference.

“This used to be an electric region by tradition in terms of its overall energy consumption,” said Portland, OR-based energy attorney Edward Finklea, speaking at Law Seminars International conference “Buying and Selling Electric Power in the West” in Seattle. “It is not an electric region anymore. Natural gas is now on a Btu basis the dominant energy source. We now use more natural gas in the Pacific Northwest than we use electricity.”

A former Bonneville Power Administration (BPA) top administrator and now a consultant in the region, Randy Hardy, raised natural gas concerns from the standpoint of what wholesale gas prices, along with the renewable energy push, are going to do to retail electricity rates in a region that has been spoiled for decades by some of the lowest power charges in the nation because of its abundant federal-run hydroelectric system.

New federal legislation “will encourage the development of new renewables — wind, solar and other promising new technologies — and regardless of the details of the legislation, it will inevitably preclude or seriously hinder coal development, which means we have to rely on natural gas as our baseload resource for electricity, along with wind and solar for everything else,” Hardy said. “That will certainly encourage more renewables, but it will also send power prices at the margin absolutely through the roof.

“When you start using natural gas as your baseload power supply — and liquefied natural gas is not going to be here that soon to save us because it can’t be developed fast enough — you will likely see greatly increased power prices at the margin in 2009 and ’10.”

A spokesman for NorthernStar Natural Gas’s Bradwood Landing LNG project along the Columbia said his project and another, along the Oregon coast at Coos Bay, were the only two viable projects, although as many as five are in some stage of development.

While Bradwood Landing has no contracts for LNG and won’t have until it obtains a permit from the Federal Energy Regulatory Commission late this year at the earliest, the company thinks gas from Alaska and other Pacific Rim areas can be brought into the Northwest for the $4 price tag, according to Tim Zenk, a Seattle-based spokesperson for NorthernStar. Assuming oil stays at $75/bbl, competing natural gas will be in the $6-8 range, according to Finklea.

Following his panel discussion, Hardy told NGI that only about half of the public- and private-sector utilities share his sense of urgency, and besides, the whole contract renewal process, which has been delayed several times over the past 12 months, is “so immensely complex” that he doesn’t think that BPA can get new deals in place by the end of this year without ramrodding through something that makes everyone unhappy to some extent.

A Puget Sound area representative for BPA, Stuart Clark, echoed Hardy’s concerns about the federal regional electricity marketer/transporter for the Columbia River hydroelectric system becoming stalled by a new administration, no matter which party gains the White House. “One of the first things that a new administration does is instruct all the federal departments not to do anything in the first months of the transition period,” he said.

Hardy thinks that the push by next year for federal GHG emissions limitations and a cap-and-trade system will ultimately drive up wholesale natural gas prices and ultimately electricity costs. Just like the prospects for a post-carbon world, current BPA power on average goes for $27/MWh, while the five-year forward market cost is $60-65/MWh, Hardy said. A new GHG law and cap-and-trade system would send those same five-year futures prices to the $90-100/MWh level in 2011, he thinks.

Western Canadian gas supplies are declining and larger portions of gas supply are going east. Rocky Mountain supplies also are migrating east as the interstate natural gas pipelines serving the Northwest remain full. Finklea said this and other factors promise to keep domestic natural gas prices in the $6-10 range, which will put more pressure on the market to bring in LNG.

Zenk pointed out that the Northwest already has some LNG with storage facilities in the Portland metropolitan area and along the coast at Newport, OR, operated by NW Natural, the major gas distribution utility in Oregon.

Finklea said no one can predict what will happen to oil prices, but unless they drop a lot, he sees $10 natural gas being a realistic wholesale price in the future nationally, and that equates to $100/MWh electricity in a region that is now more dependent on gas for power than ever.

“So what I see is that unless the projections are wrong, and oil is going to come back down to the $50 range, we’re headed for $10 gas, and the price of natural gas determines the price of electricity on the West Coast,” said Finklea, noting that it is easy to see why LNG is being pursued in the West.

“You don’t have new Canadian gas or Rockies gas and the electric industry is now dependent on natural gas, so the bridge is LNG.” 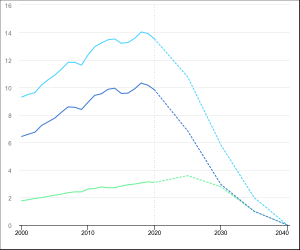 In a victory for the natural gas and coal industry, the U.S. Supreme Court on Thursday curtailed the Environmental Protection Agency’s (EPA) authority to regulate greenhouse gas emissions (GHG) from power plants. In a 6-3 decision, the high court sided with plaintiffs, including the coal-producing states of West Virginia and North Dakota, as well as…