Although it is not specifically called out as a major regulatory checkpoint, for the third time in nearly two years, the Oregon Department of Land Conservation and Development (DLCD) has put on hold an application for coastal management certification for the proposed multi-billion-dollar Jordan Cove liquefied natural gas (LNG) project along the state’s south-central coast. 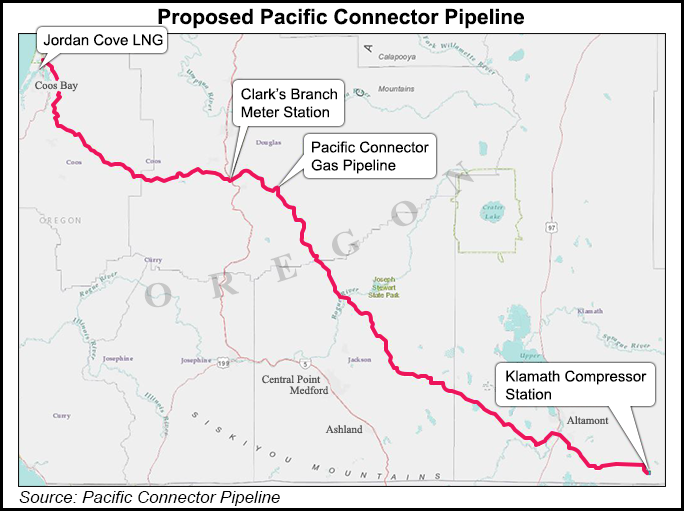 The Calgary, Alberta-based Veresen Inc. sponsored Jordan Cove project, including its 232-mile Pacific Connector transmission pipeline, originally filed with DLCD Aug. 1, 2014, and since then it has stayed the permitting activity three separate times including this week. A DLCD official told NGI Thursday that similar postponements have applied to the pending second LNG export project at the mouth of the Columbia River by Oregon LNG (see Daily GPI, Dec. 31, 2013).

Both LNG projects essentially have to have all of their state and local permits in hand before the state DLCD can determine if the projects are consistent with federal Coastal Zone Management Act (CZMA), for which the state is empowered to administer (see Daily GPI, April 30, 2015).

“This is a routine administrative procedure, which formally provides the DLCD with an agreed upon time extension to complete the CZMA process requirements,” said Veresen’s Doreen Miller, director of investor relations. “Discussions are going well with the DLCD, however they require a little more time from the previously approved time period.”

Miller said the DLCD will not necessarily take the full 180 days to come to its decision, although an official with the state agency made it appear the burden is on the project to come up with all of the required approvals from other state and local agencies.

“CZMA is a federal approval delegated to the state, and it has no bearing on the Federal Energy Regulatory Commission [FERC] timeline to issue the respective order and certificate for the terminal and pipeline, both of which we believe we could see at any time now,” Miller said (see Daily GPI, Feb. 9, 2015).

Conceivably if the stay was allowed to expire the state agency would have to deem Jordan Cove inconsistent with the CZMA for lack of complete state/local input. The DLCD is the state’s lead agency under the CZMA, therefore it must approve the coastal shipping activity contemplated in the export project.

“The reason we have had all these stays is that Jordan Cove has not received all of the pieces it needs for our consistency review,” the DLCD official told NGI. She cited the need for state lands permitting, two county land-use permits, multiple state environmental quality permits and others as still being needed by the project sponsors. “It isn’t that the project is inconsistent, it is just that we really need all the pieces in place before we can determine its consistency.”

She noted that the latest stay is in the mutual interest of the state and the project sponsors. “If we acted now, we couldn’t say it was consistent because we don’t have all the information we need.”

The state agency, which is authorized to administer the federal coastal management law, noted that Pacific Connector, as a proposed 36-inch diameter transmission pipeline would have 56.5 of its proposed 232-mile length fall under Oregon’s approval of the coastal zone act.