In the Permian Basin of West Texas, producers are paying consumers to take away their natural gas, with spot prices averaging in the negatives all week. Meanwhile, wasteful and harmful flaring of natural gas from the Permian could reach or even exceed 1 Bcf/d this year. 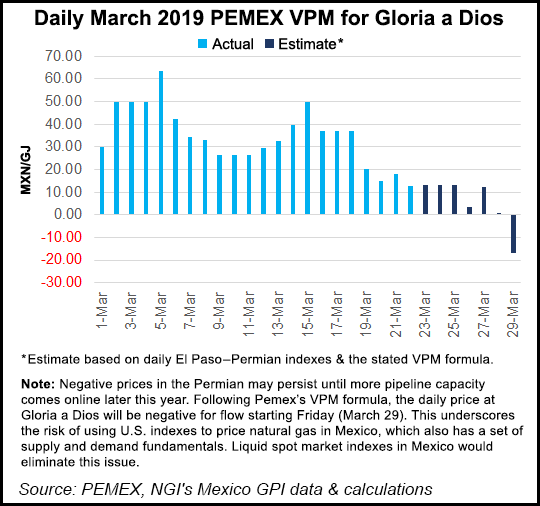 There is simply too much natural gas being produced as a byproduct of soaring oil production and nowhere for the gas to go. Genscape Inc. estimates that Permian production reached 10.8 Bcf/d for the first time ever this past weekend, about 700 MMcf/d higher than the prior year-to-date average, and about three times the total amount of natural gas currently being produced by Mexico’s state oil company PetrÃ³leos Mexicanos (Pemex).

What is happening has no historical precedent. Genscape analyst Joe Bernardi said on Wednesday that “the only U.S. hubs that have ever averaged a negative spot cash price are all in the Permian, and all have done so within the last three days of trading.” The first time negative prices were recorded in the U.S. was last November, also in the Permian.

It will be at least six months before new natural gas pipeline infrastructure is in place to alleviate the strain, according to analysts at RBN Energy LLC, who added they “wouldn’t be surprised if Waha trades even further into negative territory than it did this week.”

This news is deeply frustrating to consumers of natural gas in Mexico. The Permian basin and the Waha gas trading hub lie just miles from the U.S.-Mexico border, and yet natural gas shortages remain a serious threat to Mexican industry.

“It’s hard to make sense of the fact that there are critical natural gas alerts in the center of Mexico and in the Yucatan Peninsula, and yet natural gas prices are negative north of Ciudad Juarez,” GMEC energy consultancy’s Gonzalo Monroy told NGI’s Mexico GPI.

The cross-border infrastructure to get Texas gas into Mexico is in place. As of 2016, Mexico had 7.5 Bcf of cross-border capacity, about 3 Bcf higher than the current level of U.S. exports. Mexico’s pipeline operator Centro Nacional de Control del Gas Natural (Cenagas) is predicting this figure to increase to 13.5 Bcf this year. The principal issue is a lack of pipelines on the Mexican side of the border.

“The three intrastate pipelines that were built from Waha into Mexico — Roadrunner, Comanche Trail, and TransPecos — are still underutilized, because of the underdeveloped and delayed pipelines in Mexico,” said NGI’s Patrick Rau, director of strategy and research. “There is just no excess capacity to move gas out of the region right now.”

But there should be relief soon. The El Encino-La Laguna, La Laguna-Aguascalientes, and Villa de Reyes-Aguascalientes-Guadalajara pipelines, which together form the final three sections of the Wahalajara pipeline system under construction by privately held Mexican developer Fermaca, should be ready this spring, according to a recent report by RBN Energy.

While Wahalajara will connect Waha gas to the city of Guadalajara in west-central Mexico, many suggest more needs to be done to take advantage of the opportunity presented.

“I think that it is not only a question of getting the stalled pipelines moving, but also to convince Cenagas to work together with the private sector to improve connections with [national pipeline system] Sistrangas, particularly with the pipeline that is connected to Waha,” Eduardo Prud’homme, an energy consultant in Mexico City, and the architect of the Sistrangas system, told NGI’s Mexico GPI. “It’s important to develop market hubs in the El Encino area and to work together with Fermaca there. We need enough interconnections as possible with Wahalajara, so we can get gas into the industrial heart of Mexico.

“The other important point is, once we have interconnections in the Waha area, we will be able to better achieve balance across the entire country,” he added. “We will be able to release volumes that are injected into the Reynosa and Gulf area, so that gas can move to the center and also to the southeast of Mexico. So there is a systemic benefit here. The effect is not regional but country-wide.”

The negative pricing has also renewed interested in potential liquified natural gas (LNG) export projects from the West Coast of Mexico, which would have the principle advantage of getting U.S. gas to Asian markets without vessels having to pass through the Panama Canal.

On Wednesday, Sempra Energy said it is exploring ways to expand the proposed capacity and expedite development of its EnergÃ­a Costa Azul (ECA) LNG liquefaction project in Mexico’s Baja California state. “As you might expect, given its geographic privilege there is significant market interest in this project,” President Justin Bird said, saying that shipping times from ECA to Asia could be reduced by about half in comparison with the Gulf Coast.

The development of these projects and the natural gas market in general in Mexico, of course, crucially hinges on the energy policy of the new administration of AndrÃ©s Manuel LÃ³pez Obrador. The president has said he wants to lessen Mexico’s dependence on U.S. natural gas, and focus instead on boosting domestic production while increasing the roles played by state companies Pemex and ComisiÃ³n Federal de Electricidad (CFE) across the energy chain.