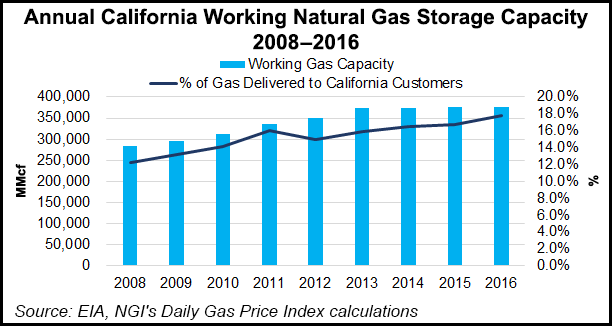 Porter Ranch residents and conservation groups including the Food & Water Watch and SoCal 350 Climate Action rallied at the offices of a legislator who so far has abstained from voting on SB 57, which would require an ongoing root cause investigation to be completed of the four-month 2015-2016 Aliso Canyon storage well leak before new gas may be re-injected at the 3,600-acre facility.

A rally organizer indicated that state Sen. Ed Hernandez would not commit to backing SB 57, and protesters were threatening to oppose his bid to run for lieutenant governor in 2018. Hernandez is said to have taken $42,550 in campaign contributions from oil and gas companies over the past 10 years, including $9,300 from San Diego-based Sempra Energy, whose Southern California Gas Co. (SoCalGas) utility owns and operates Aliso.

Food & Water Watch organizer Alexandra Nagy told NGI the group had gotten “hundreds of calls from across the state” on Wednesday urging Hernandez to vote in favor of SB 57.

Last week the measure fell three votes short of passage in the Senate as 27, or a super-majority were needed.

Since the leak happened, which forced thousands of Porter Ranch residents to temporarily evacuate their homes, a coalition of stakeholders has made the proposed permanent closure of Aliso Canyon a crusade.

Meanwhile in Sacramento, a veteran energy sector observer predicted that SB 57 may become a two-year bill that is taken up next year, not as an urgency measure, meaning a simple majority would be able to enact it. Currently, the bill’s urgency status cannot be changed, and thus, it requires a two-thirds vote for passage.

Under the rules of the California legislature, SB 57 was not approved by its so-called “house of origin” (the Senate) by a deadline established in the legislature’s rules, the capitol source said. “However, it has an urgency clause attached to it, and that means the deadline doesn’t really apply, so it is still alive,” the source told NGI on Wednesday, noting that the urgency designation remains.

“SB 57 can pass any day with a two-thirds vote or it can wait until 2018 and amend the urgency clause out, allowing its approval by a simple majority.”

After the leak was plugged last year SB 380 was signed into law to essentially codify what the state Division of Oil, Gas and Geothermal Resources (DOGGR) had implemented in response to the leak.

Earlier this year, Los Angeles County’s five-member elected Board of Supervisors filed a lawsuit against state regulators to force them to keep Aliso closed. County and city health and fire officials also have expressed concerns about the facility.

The root cause of the prolonged storage well leak still has not been identified by state authorities. The Los Angeles County lawsuit accuses DOGGR of ending a safety review without knowing the seismic risk of the facility.