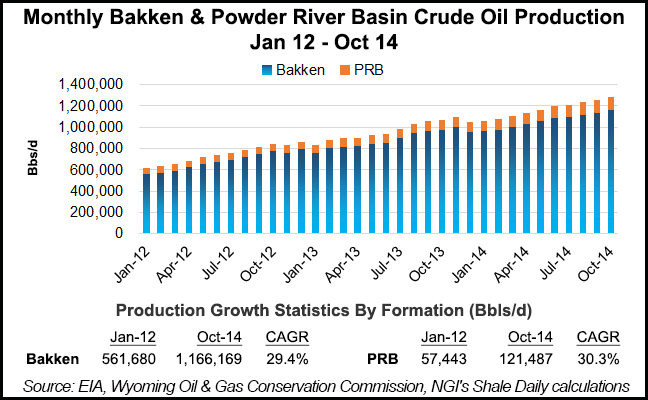 The full expansion on the joint open season will be completed in 2016.

The proposed expansion project is wooing Bakken oil producers that are looking to pipe crude to Guernsey, WY, and eventually to Cushing, OK. Hiland on Dec. 19 announced a deadline extension to receive shipper commitments for its Double H Pipeline and Tallgrass Pony Express Pipelines. The Double H pipeline is capable of receiving crude from the Bakken and the Powder River Basin. The Pony Express Pipeline will connect to Cushing (see Shale Daily, Sept. 26).

Double H is a 488-mile pipeline currently under construction for which an initial open season for base capacity was held in 2012. It originates in the Bakken oil production areas near Dore, ND and Sydney, MT, and terminates at Hiland’s storage tank system near Guernsey.

“The expansion of the Double H and the Tallgrass Pony Express pipelines covered by these open seasons is not dependent on a minimum threshold of commitments received,” said Hiland Senior Vice President Jim Suttle. “Hiland will move forward with its pipeline expansion to provide the level of capacity requested by qualified committed shippers.”

Hiland’s local open season from points in the Bakken and Powder River Basin to Guernsey will be capable of providing interim expansion capacity by some time in 1Q2015, company officials said. Interim capacity from these points to Cushing on its joint open season with Pony Express is expected to be available mid-2015.

Hiland officials said that interested parties may review the details of the open seasons by executing a confidentiality agreement. Information may be found on the Hiland website. Questions may be directed to Dwaine Shroyer at (405) 401-9569 or Jim Suttle at (580) 616-2050.

Separately, Belle Fourche Pipeline Co., in conjunction with Bridger Pipeline LLC, announced that they will also work to move more Bakken crude through Guernsey. The two pipeline companies have issued an open season call to obtain volume commitments to support expansions of their common carrier pipeline systems that move Bakken and Powder River Basin crude through Guernsey on its way to Cushing.

Belle Fourche and Bridger said that they are coordinating their planned expansions to coincide with the expansion of another pipeline, together offering joint transportation service to Cushing. “The design of the expansion and the additional capacity volume available on the pipelines will be dependent on commitments received during the open season,” the companies said.