Even with global disruptions and increased demand, global oil supply in 2019 beyond the Organization of the Petroleum Exporting Countries (OPEC) is expected to be broadly unchanged from this year, mostly because of an expected uptick in North American output and project startups in Brazil. 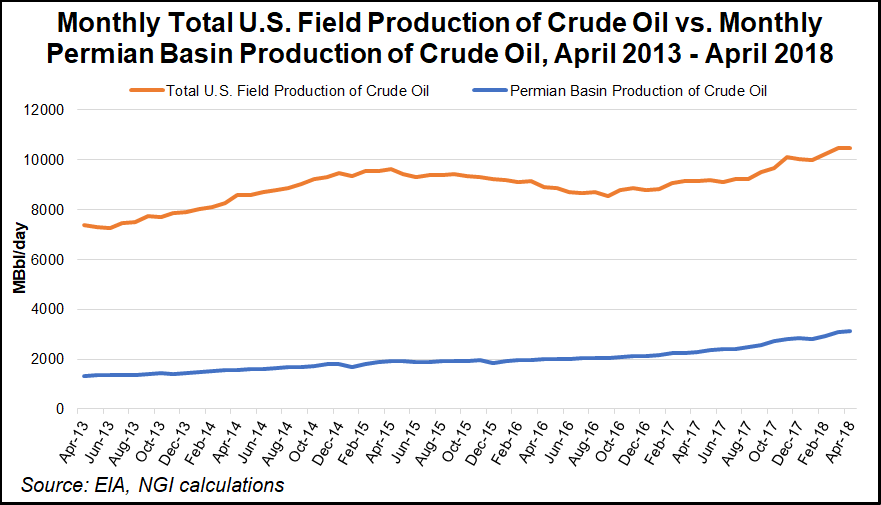 Oil supplies outside OPEC in 2019 are projected to expand by 2.1 million b/d to an average of 61.64 million b/d, led by the United States and followed by Brazil, Canada, Australia, Kazakhstan and the UK.

Mexico, China and Norway oil supplies next year “are expected to witness the main declines” from “the absence of new projects and heavy declines in mature fields,” MOMR reported.

The pace of U.S. unconventional growth in the second half of 2018 and into early 2019 is forecast by OPEC to “slow down considerably” mainly because of takeaway capacity constraints in the Permian Basin.

“Some of the planned pipeline capacity increases have been delayed, and as a result, the takeaway capacity issue could remain a major constraint until next winter,” the MOMR noted.

In addition, the Permian rig count and well completions “could start to slow and well productivity could decline as operators expand production beyond ”sweet spots.’”

New projects are anticipated to support oil supply in Brazil during 2019, while Canada is continuing to expand its oil output, particularly from oilsands projects.

U.S. oil demand has been supported by “strong expansions in the petrochemical sector as well as a healthy and growing economy,” OPEC noted. The first four months of 2018 were distinguished by rising demand for natural gas liquids and liquefied petroleum gas “as a feedstock for the petrochemical industry, following a slowdown during the second half of 2017 and as a result of weather conditions.”

OPEC also weighed in on the escalating global trade conflict precipitated by the Trump administration, which has led to backlash around the world. The trade dispute so far has had “only a minor impact on the global economy,” and the 2019 forecast “considers no significant rise in trade tariffs and that current disputes will be resolved soon.”

The increase in global trade has “been a significant factor lifting world economic growth to higher levels in both 2017 and 2018,” OPEC researchers noted. “Hence, if trade tensions rise further, and given other uncertainties, it could weigh on business and consumer sentiment. This may then start to negatively impact investment, capital flows and consumer spending, with a subsequent negative effect on the global oil market.”

The International Energy Agency (IEA), the global energy watchdog, in its monthly Oil Market Report (OMR) issued on Thursday, warned that spare capacity oil supply could become “stretched to the limit” because various conflicts are reducing supply in key producing regions that include Iran, Venezuela and Libya.

“Some of these supply issues are likely to be resolved, but the large number of disruptions reminds us of the pressure on global oil supply,” IEA said. “This will become an even bigger issue as rising production from Middle East Gulf countries and Russia, welcome though it is, comes at the expense of the world’s spare capacity cushion, which might be stretched to the limit.

“This vulnerability currently underpins oil prices and seems likely to continue doing so. We see no sign of higher production from elsewhere that might ease fears of market tightness.”

IEA’s overall growth outlook in 2018 for non-OPEC production has been reduced slightly to 1.97 million b/d, while the 2019 estimate is for a modest increase to 1.84 million b/d.

“On the demand side, although there are emerging signs of reduced economic confidence, and consumers are unhappy at higher prices, we retain our view that growth in 2018 will be 1.4 million b/d, and about the same next year,” IEA said.

This summer “promises to be anything but quiet as markets adjust to the ever-changing geopolitical and physical climate. We continue to be in a close dialogue with major producers and consumers, both inside and outside the IEA family, and are monitoring market developments in order to be prepared to advise on any support that might be needed.”

Sanford C. Bernstein & Co. LLC researchers in their independent review of the global supply and demand data said U.S. volumes should begin to increase heading into 2019. And as OPEC formally ends its production cuts following a ministerial meeting in June, “we should see the oil market remain in balance, as demand growth absorbs the increase in supply.”

According to several independent and government analyses, the United States could become the world’s biggest oil producer as soon as next year. Unconventional drilling for domestic oil between 2008 and 2018 has more than doubled and now exceeds the previous high mark set in 1970, according to a recent report by IHS Markit.

“On a net basis, the United States went from importing 60% of its liquid fuel at the peak to below 16% in 2018 — and the share is still falling,” researchers said. “The United States is now on track to be the world’s largest oil producer, ahead of Russia and Saudi Arabia, by early next year.”