Despite every effort of the government to back state oil company Petróleos Mexicanos (Pemex), Mexico’s liquids production is set to drop marginally this year, by 7,000 b/d, to average 1.85 million b/d in 2020, according to the Organization of the Petroleum Exporting Countries (OPEC). 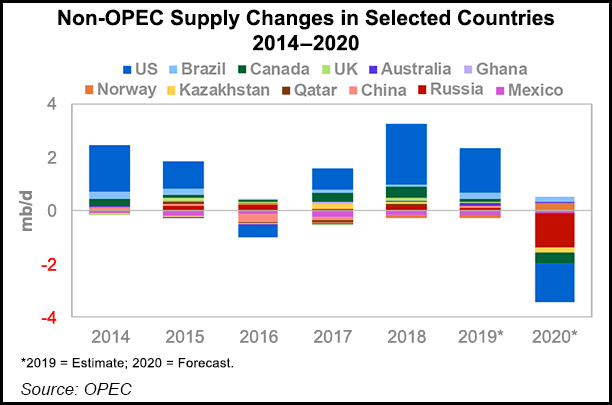 OPEC researchers said in the Monthly Oil Market Report for May that April output in Mexico dipped after five straight months of gains.

“Preliminary expectations for lower crude oil output in April could be due to lower price levels, but the average production cost in 2019 was less than $15/bbl and both Pemex and the federal government have hedged 55% of total 2020 crude production at $49/bbl.”

Nevertheless, researchers said, “Mexico is faced not only with a high decline rate from mature fields” but the country may also “be challenged to follow through with planned upstream spending.”

Mexico has gone against the grain and is still charging ahead on its plans to try to grow oil and gas production, despite April oil prices that were so low that they went negative on April 20.

The country in fact added to its rig count in April even as the rest of the region dropped rigs. Mexico had 46 active rigs in April, compared to 44 in March. In April 2019, Mexico had 35 active rigs.

Late last month, Mexico’s government threw its support behind the heavily indebted Pemex by agreeing to measures including a fiscal relief decree pertaining to the profit-sharing duty in an attempt to mitigate the impact of falling oil prices on the balance sheet and liquidity. In total, the measures amount to 156 billion pesos ($6.5 billion), executives said.

Pemex also agreed to slash capital expenditures (capex) for the year in the upstream segment by around $1.7 billion, or about 13%. The capex reduction puts it firmly on the lower end of national oil company and supermajor spending cuts according to analysis by Welligence Energy Analytics.

Brazil’s Petróleo Brasileiro SA (Petrobras) has cut its capex by $3.5 billion, or about on average with peers, according to Welligence, but OPEC still sees Brazil liquids production growing 19,000 b/d this year.

In early April, Petrobras agreed to reduce its oil production by 200,000 b/d in response to the contraction of demand for oil and oil-related products, which led to OPEC lowering its still positive growth projection.

Latin America produces around 8 million b/d of crude, with Mexico and Brazil together accounting for half of the amount.

In Argentina, production shut-ins at the Loma Campana oil project in the Vaca Muerta shale are likely to impact yearly production by 30,000 b/d, OPEC said. Colombia will see an output decline of 50,000 b/d this year.

However, these figures are a blip of overall production loss.

For 2020, non-OPEC liquids production, which includes the United States, is forecast to contract by 3.53 million b/d to average 61.50 million b/d. Non-OPEC encapsulates all of the producing states in the Americas, except for Venezuela, an OPEC member now producing around 600,000 b/d.

“This was mainly due to production shut-ins announced by companies in the U.S. and Canada followed by Brazil, Australia, Ecuador, Norway, Argentina and the UK,” researchers said.

Non-OPEC capex in 2020 is forecast to decline by 23% year/year, according to preliminary OPEC estimates, which is about half the level of capex seen in 2014.

In response to the market imbalance caused by coronavirus demand destruction, OPEC and 10 non-OPEC participants pledged to cut their combined production by 9.7 million b/d in May and June, to be followed by a combined reduction of 7.7 million b/d in the second half and by 5.8 million b/d for a period of 16 months starting next January.

Mexico’s part of this commitment is a reduction of 100,000 b/d for May and June.

Furthermore, Saudi Arabia, the United Arab Emirates and Kuwait announced that they would voluntarily deepen oil output adjustments beginning June, by 1 million b/d, 100,000 b/d and 80,000 b/d respectively, in “an effort to expedite draining a global supply glut and rebalancing the oil market.”

The question remains whether these efforts will be enough to balance the market.

The International Energy Agency (IEA) forecasts that total energy demand across the globe will plunge by 6% in 2020, seven times the decline that resulted from the 2008 global financial crisis.

“In absolute terms, the decline is unprecedented — the equivalent of losing the entire energy demand of India, the world’s third largest energy consumer,” IEA researchers said. “Advanced economies are expected to see the biggest declines, with demand set to fall by 9% in the United States and by 11% in the European Union.”

Researchers found that each month of worldwide lockdown at the levels seen in early April may translate to a 1.5% dent in annual global energy demand. Therefore, the pandemic’s impact on energy demand will depend largely on the stringency and duration of Covid-19 containment measures, IEA said.

Renewables are expected to be the only energy source that will grow in 2020 because of their priority access to grids and low operating costs, researchers said.

The combined share of gas and coal in the global power mix, meanwhile, is set to drop by 3% to a level not seen since 2001.

Global natural gas demand is on track to drop by a record 5% in 2020 from the economic impacts of Covid-19, the IEA said Wednesday. The year/year decline, which follows 10 years of uninterrupted growth, would be the largest on record since gas demand developed at scale during the second half of the 20th century, IEA said in its Global Energy Review report.

Nonetheless, researchers expect the drop to be less pronounced than the decline in oil consumption because of oil’s exposure to the collapse in transportation fuel demand.