Rebalancing the global oil glut is going to take more than a temporary pullback by the world’s largest producers because U.S. unconventional production is overwhelming any shortfall and coming back faster than anticipated, the International Energy Agency said. 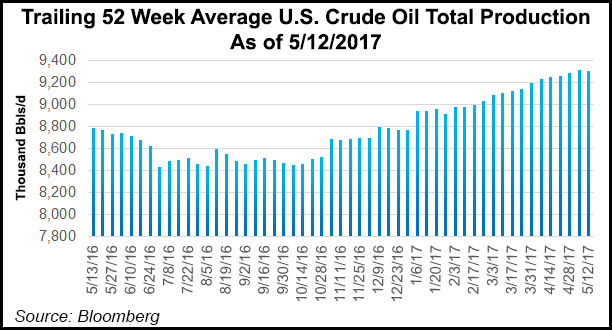 The latest Oil Market Report (OMR) issued on Tuesday, comes about one week before the scheduled ministerial meeting on May 25 by the Organization of the Petroleum Exporting Countries (OPEC), the global energy watchdog noted. The 13-member oil cartel last November formally agreed to reduce oil output through May, and it is meeting to consider extending the reduction.

The global oil market almost was balanced in 1Q2017, according to the OMR. Since bottoming out in September, however, U.S. crude oil production has increased by nearly 465,000 b/d.

“The most closely watched data point on the supply side is U.S. crude production,” said researchers. U.S. output “increased again in February by nearly 200,000 b/d, and at 9.03 million b/d was the highest since March last year.” In line with “stronger recent performance from the U.S. shale sector, we have revised upwards our expectation throughout 2017, and we now expect total U.S. crude production to exit the year 790,000 b/d higher than at the end of 2016, which is an upward revision of 100,000 b/d since last month’s report…

“Such is the diversity and dynamism of the U.S. shale sector that our numbers are likely to be a moving target as 2017 progresses. The overall outlook for the non-OPEC countries, 11 of which are voluntarily cutting production to support OPEC, shows growth in 2017 of nearly 600,000 b/d, an increase on the 490,000 b/d seen in last month’s report.”

At its meeting, OPEC is expected to renew its decision to reduce production by more than 1 million b/d through 2017. Russia on Monday joined with lead OPEC member Saudi Arabia in calling for reductions to be extended through March 2018.

However, even if OPEC and its allies agreed to extend reductions through the last half of this year, “stocks at the end of 2017 might not have fallen to the five-year average, suggesting that much work remains to be done in the second half of 2017 to drain them further,” the OMR researchers warned.

The overall forecast for non-OPEC countries, 11 of which have voluntarily reduced oil output to support OPEC, shows growth this year of almost 600.000 b/d which is up from a forecast by IEA in April of 490,000 b/d.

In response to the glut, Jefferies LLC on Tuesday reduced its long-term oil price forecast to $70/bbl from $85 based on a “quicker-than-expected rebound in U.S. production/rig count and the results of our bottom-up shale production model, which shows U.S. exit to exit growth of 0.9 million b/d in 2017 and 1.2 million b/d in 2018.”

Analysts Michael Hsu and Zach Parham said they remain bullish on oil prices “but less so than earlier this year. We continue to expect OPEC production cuts to have their intended consequences, and we expect a favorable outcome to the May 25 OPEC meeting. However, the recovery in the U.S. rig count and the inflection in U.S. crude oil production have been quicker and more pronounced than we expected.”