Stung by continuing oversupply wrought by the U.S. unconventional revolution, the 14-nation Organization of the Petroleum Exporting Countries (OPEC) reached a tentative agreement Wednesday to reduce output for the first time in eight years — to 32.5 million b/d from an August level of 33.24 million b/d. 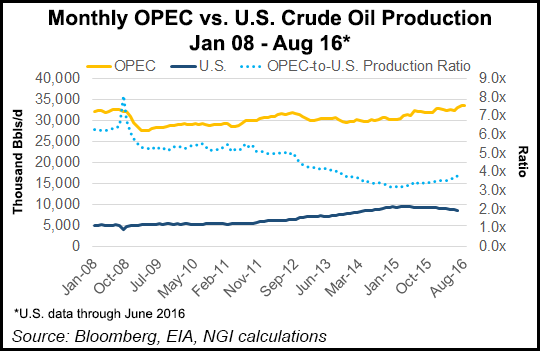 According to several media reports quoting OPEC sources meeting in Algiers this week, the plan would be finalized at a formal meeting on Nov. 30 in Vienna. Once the production targets are agreed to by each of the member countries, OPEC would reach out to “non-OPEC” operators including Russia to cooperate with the deal. The global cartel now produces more than one-third of global crude oil output.

“OPEC is cutting production by roughly 750,000 b/d, and that could be even more if OPEC is successful in enticing other non-OPEC countries that don’t have stringent anti-trust laws to join their effort,” said NGI’s Patrick Rau, director of strategy and research. “U.S. crude oil production through June was down more than 925,000 b/d since peaking in April 2015, so the U.S. likely has the ability to make up that volume fairly quickly if it so chose.

“Many U.S. based oil and gas companies mentioned during their 2Q2016 conference calls that they would likely increase drilling activity if West Texas Intermediate (WTI) crude prices were to rise above $50, and the OPEC announcement has already pushed WTI closer to $47.

“Point being, if the November OPEC cuts have teeth, look for December U.S. E&P capital expenditure budget meetings to focus on adding dollars to oil-focused drilling.”

On the news, oil prices rallied and S&P 500 energy stocks tracked for one of the strongest days of the year. ExxonMobil Corp. gained 4.4% on the day, while BP plc rose 3.66% and Royal Dutch Shell plc was up 3.44%.

Sources said it was unclear how the production cuts would be achieved, but a committee is to be formed to study how to implement them in various countries before the cartel meets in two months.

The global oil markets, and in particular OPEC, have been rocked since the U.S. onshore renaissance propelled North America to the top of the leader board for global oil production.

Societe Generale’s Michael Wittner, global head of oil research, said the OPEC deal “could potentially be very significant, not for the barrels that could be removed from the market, but because it’s a signal that the Saudis could be returning to active supply management. That’s the bottom line. It remains to be seen how many real barrels will be removed from the market. To me, the significance is way beyond that: they all sat down in a room and made a decision.”

Goldman Sachs analysts pointed out in a note this week that an OPEC cutback could prove bullish for prices in the short term, but three member countries — Iran, Iraq and Venezuela — already had guided in the past month to a 250,000 b/d rise in production next year.

Even with a cutback, however, demand remains weaker than expected, and “we find that the potential for less disruptions and still relatively high net long speculative positioning leave risks skewed to the downside into year-end,” Goldman analysts said.

OPEC participants have been suggesting more collaboration between members than in previous attempts, as they face headwinds from strong U.S. onshore output. However, Goldman’s production forecast “continues to reflect a seasonal Saudi production decline into year-end and no growth elsewhere (the equivalent of a deal) with OPEC, except Libya/Nigeria production growth only resuming in 1Q2017.”