The oil-rich consortium of countries known as OPEC-plus on Thursday affirmed its intentions, first signaled earlier in June, to ramp up production in July and August. It is targeting output growth of 648,000 b/d both months. 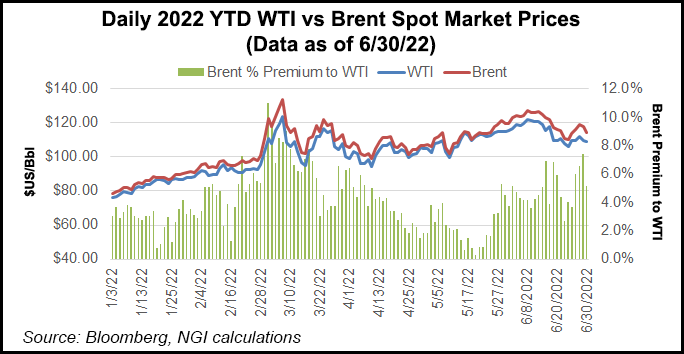 If the cartel could meet its goals, the group’s average crude generation would climb to nearly 44 million b/d by August, on par with pre-pandemic levels.

Given that OPEC-plus accounts for nearly half of the world’s output, production levels are trailing demand. The supply/demand imbalance has put upward pressure on oil prices. Brent crude, the international benchmark, is up nearly 50% this year.

The OPEC-plus announcement, however, gave traders enough reason to pause the rally on Thursday, with Brent crude down more than 1% in intraday trading to around $115/bbl.

However, bulls have an abundance of price drivers in their arsenal.

Notably, Saudi Arabia-led OPEC cautioned earlier in the week that the group and its allies had fallen short of targets through the spring months. This included a nearly 3 million b/d miss below the OPEC-plus goal of about 42 million b/d in May.

Member countries are struggling with aging infrastructure, inflation and political strife. This includes Russia, which leads the allied faction of OPEC-plus, because of its war in Ukraine. The United States and European Union levied multiple rounds of sanctions against the Kremlin in protest of the war, including embargoes on Russian oil imports.

Rystad Energy estimated that about 800,000 b/d of Russian crude capacity emerged following Western sanctions this spring. The firm cautioned that, despite Kremlin efforts to redirect its excess crude to Asia, more penalties loomed. Leaders of the Group of Seven (G7) nations on Tuesday culminated a three-day summit by vowing to impose a price cap on Russian oil.

While details were still being fleshed out, the G7 envisions barring service providers such as shippers from dealing with oil priced above a set level. Many of these providers are based in Europe and are therefore covered by G7 agreements. If implemented, this could further limit Russian exports and increase competition for Saudi and American crude.

At the same time, American oil producers are increasing output, but only gradually. They are walking a fine line between ramping up to meet demand and, at the same time, financing long-term renewable energy projects at the behest of institutional investors and the Biden administration.

Domestic crude output climbed to a 2022 peak of 12.1 million b/d for the week ended June 24, up 100,000 b/d week/week, according to the Energy Information Administration’s (EIA) Weekly Petroleum Status Report issued on Wednesday.

Rystad analyst Louise Dickson said even with refiners calling for more, producers are also leery because of the specter of an inflation-induced economic slowdown. Fiscal policymakers are jacking up interest rates to combat inflation and, historically, the rate-hike process has tilted the U.S. economy into recession. Demand for oil often ebbs during recessions.

“However, very few market participants are already calling for a recession to materialize in the third quarter of 2022, so the economic slowdown concerns should not, in theory, negatively impact” oil prices this summer “as supply-demand dynamics remain bullish,” Dickson said.

Against that backdrop, President Biden is walking a tightrope. The president promises to put the United States on a path to net zero emissions in part by phasing out oil over the next few decades. At the same time, he faces mounting political pressure to combat current lofty oil prices – and, by extension, gasoline and jet fuel costs for American consumers.

The president has reluctantly pressed U.S. producers to increase activity, though his administration has conceded that American output is unlikely to jump materially this year, given the overhang of needed investments in renewables. This leaves President Biden to press Saudi Arabia to drive up its output to meet demand and ease price pressure. The president plans to travel to Saudi Arabia in mid-July.

In televised remarks Thursday, he stopped short of saying whether he would lobby the Kingdom to further bolster production. Because other members of OPEC are grappling with weakened infrastructure and Russia remains a wildcard as the war grinds on, analysts said it is difficult to envision another purpose for the trip. Saudi Arabia and partner United Arab Emirates are the only other major players with spare capacity and the ability to quench the world’s thirst for oil in the near term, according to ClearView Energy Partners  LLC.

“Whereas Saudi Arabia might be able to deliver, Western sanctions” and “moral opprobrium make Russia unlikely to do so,” the ClearView analysts said. This “puts a spotlight on President Joe Biden’s planned travel to the Middle East July 13-16.”

The ”hard truth” for the president is that to “ensure secure and affordable fuel for consumers,” the United States will have to tap fossil fuel supplies wherever it can and likely also support investments in more domestic infrastructure, “at least in the near to medium term,” researchers Jason Bordoff of Columbia University and Meghan O’Sullivan of Harvard University said in a June report.

President Biden and counterparts globally should also push for energy conservation, they argued, though that appears a long shot.

“With a far worse energy crisis still to come, policymakers around the world should make reducing energy consumption in the short, medium, and long term a central component of any strategy,” Bordoff and O’Sullivan wrote. “Unfortunately,” Germany’s recent call on citizens and companies to conserve appears “the exception to the approach being taken by most countries to cope with looming energy shortages.”