The Organization of the Petroleum Exporting Countries and its oil-producing allies, aka OPEC-plus, vowed to further increase output in July, keeping with a plan agreed to in April that calls for the cartel to add more than 2 million b/d back into the market between May and the end of July. 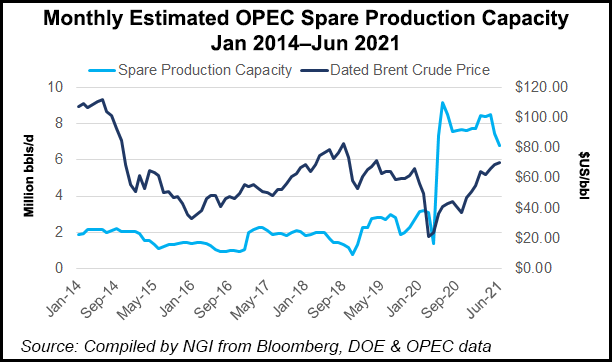 The group led by Saudi Arabia and its ally Russia said it would further boost production by 450,000 b/d next month. Over the course of the three-month effort, plans are to increase global supplies by 2.1 million b/d. As part of the plan, Saudi Arabia would continue to unwind unilateral cuts of 1 million b/d that it put in place early this year when demand outlooks were still tepid.

OPEC policymakers cited  “clear signs of improvement” in oil demand as coronavirus vaccination programs advance, particularly in the United States, in announcing the July plan on Tuesday. They see demand rapidly increasing in the second half of 2021, necessitating the output increases to target supply/demand balance.

Markets appeared in sync with the cartel. Brent crude, the international benchmark, rose 93 cents to $70.25/bbl on Tuesday, reaching its highest level since May 2019. Brent prices advanced further in intraday trading Wednesday.

An OPEC-Plus committee this week forecast that oil demand would increase by about 6 million b/d in the second half of this year. Mounting demand could push global oil inventories below the five-year average for the 2015-2019, prior to the pandemic, the committee said.

Demand is rising across major economies, including Western Europe, China and the United States, analysts have said. This is developing steadily alongside successful inoculation campaigns that have switched on a light at the end of the pandemic tunnel, enabling economies to fully reopen and unleashing pent-up demand.

In the United States, petroleum demand jumped in May, the U.S. Energy Information Administration (EIA) said last week. EIA said in its latest Weekly Petroleum Status Report (WPSR) that overall petroleum demand for the period ended May 21 rose 3.5% week/week after climbing 10% a week earlier, lifted by mounting demand for gasoline and a surge in consumption of jet fuel.

EIA is scheduled to release its WSPR on Thursday for the week ended May 28. a day later than usual because of the Memorial Day holiday on Monday.

Meanwhile, U.S. production for the latest week held at 11.0 million b/d, EIA said. Output has hovered around that level all year – with domestic producers hesitant to ramp up production – adding to the OPEC-plus group’s sense of urgency. U.S. output in May was about 2.1 million b/d below the 2020 high last March, EIA said.

U.S. crude oil inventories are about 2% below the five-year average.

Even with the demand expectations, OPEC-plus deferred decisions on output policy beyond next month. It will pick up that debate at its next meeting, which is slated for July 1.

The pandemic’s trajectory in India and other heavily populated countries that are still grappling with virus outbreaks remains a wildcard. The potential for increased production in Iran is another unknown.

Negotiations are underway between Iran and Western nations to reinstate a deal that would limit Iran’s ability to develop nuclear weapons in exchange for eased economic sanctions. If sanctions were lifted, Iran could ramp up exports by more than 1 million b/d, analysts noted.

Independent analyst Bob Tippee, a contributor to RBN Energy LLC, said Iranian output is already rising “as sales to China skirt international sanctions.”  He said it would be difficult to strike a consistent supply/demand balance coming out of the pandemic.

The global oil market is “huge and complex, susceptible to surprises like hurricanes and conflicts that disrupt production and recessions that reduce demand,” Tippee said. “Predictions about supply and consumption are almost impossible to get right, even in normal times.”

OPEC-plus in 2020 launched an immense curtailment of crude production in response to the demand destruction caused by the pandemic. The cartel cut output by a record of 9.7 million b/d initially. It then eased those cuts 7.7 million b/d and then to the 7.2 million b/d level early this year.