A coalition of major oil producing countries agreed on Tuesday to further boost output to meet expectations for strong demand, despite concerns about the rapidly spreading Omicron variant of the coronavirus. 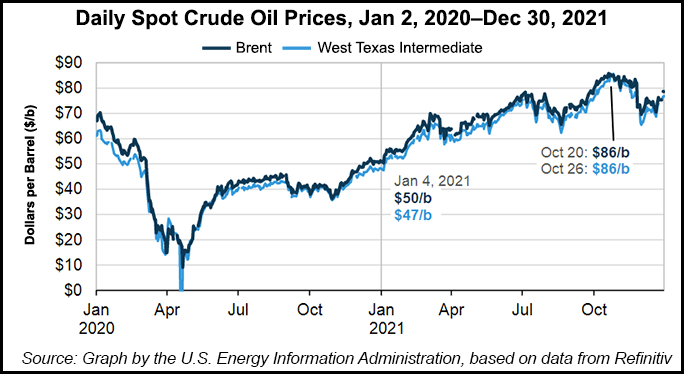 Policymakers from the Organization of the Petroleum Exporting Countries (OPEC), headed by Saudi Arabia, and a Russia-led group of allies known as OPEC-plus, said they would collectively ramp up production by 400,000 b/d in February, continuing a targeted pace of monthly supply increases the cartel began in August.

OPEC-plus officials cited Omicron as a concern, given that it is spreading quickly throughout the globe. The United States, for example, reported a record 1.08 million new coronavirus infections on Monday.

Still, cartel policymakers also emphasized early indications of the new variant causing less severe illness than previous forms of the virus. They said this provided confidence that governments around the world would refrain from instituting major new economic restrictions to slow spread of the disease, enabling the travel and business activity that fueled a resurgence in oil demand last year to continue into 2022.

Rystad Energy analysts noted that Brent crude prices advanced more than 50% in 2021 and hovered around $80/bbl on Tuesday. They said that price level suggests markets are aligned with OPEC’s confidence, despite Omicron-related employee absences that have hampered airlines  and forced companies to once again reassess plans to bring workers back to offices.

Mizuho Securities USA LLC’s Robert Yawger, director of energy futures, said the OPEC-plus decision to continue supply increases “was made easier” by the fact that Libyan production dropped by an estimated 550,000 bbl in recent days amid political strife and pipe leaks in the troubled country. Additionally, he noted, OPEC-plus member Nigeria has struggled to meet its increased production quota in recent months because of deteriorating infrastructure.

Members of an OPEC-plus committee said Monday that they expect a global supply surplus of 1.4 million b/d by the end of the first quarter. That was 25% smaller than the producer group’s estimate from a month earlier, Yawger noted, but it still could give the cartel reason to pause supply increases in March.

OPEC-plus is scheduled to meet next on Feb. 2 to determine production plans for March.

In the meantime, U.S. producers have also gradually ramped up crude output.

Separate from the  production policy meeting, OPEC this week appointed a long-time Kuwaiti oil official as its next secretary general. The cartel said Haitham al-Ghais would replace current secretary-general Mohammad Barkindo, a former Nigerian oil official who has held the job since 2016. Haitham al-Ghais will take the reins in August, when Barkindo’s second term ends.