Citing rising global energy needs, the Organization of the Petroleum Exporting Countries (OPEC) and its allies on Monday affirmed a plan to increase crude production through November. The cartel stopped short of further boosting output levels, however, a decision that fueled supply concerns and sent oil futures to seven-year highs. 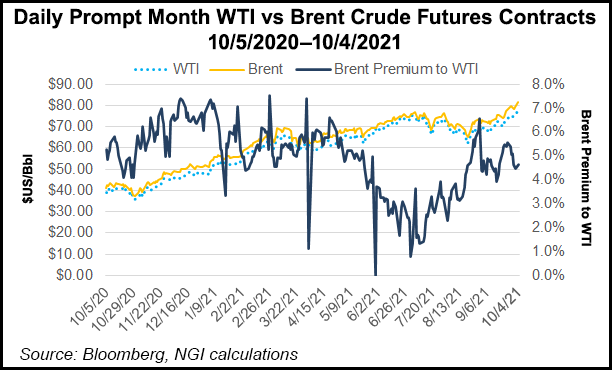 OPEC, led by Saudi Arabia, and a group of allied oil producers headed by Russia, aka OPEC-plus, approved another 400,000 b/d production increase for next month, continuing a plan that is tentatively slated to extend into 2022 to balance supply with rising demand.  OPEC-plus plans to meet monthly to review the plan.

Following earlier increases, the cartel in July agreed to raise output by 400,000 b/d monthly. It launched this in August with plans to continue at that pace until it unwinds all of the cuts made amid the pandemic in 2020. The cartel slashed output by 9.7 million b/d last year. Nearly 6 million b/d of that remained offline as OPEC and its partners met Monday.

Analysts said OPEC-plus officials are eager to increase production to capitalize on higher prices, yet they are also leery of potential demand interruptions as the Delta variant of the coronavirus in recent weeks drove surges in new cases.

“We believe much uncertainty remains in terms of potential Covid-related demand destruction, power generation fuel switching to fuel oil due to high gas prices and the possible return of incremental supply from Iran and Venezuela,” ClearView Energy Partners LLC said.

Despite pandemic concerns, the OPEC-plus meeting took place as businesses around the globe are ramping up activity alongside vaccination efforts, driving demand for energy. Natural gas demand – and prices — soared in September following extreme weather conditions this year and depleted stockpiles in Europe, parts of Asia and elsewhere. Though volatile, gas futures hit their highest levels in more than a decade last month and are expected to prove elevated this winter.

It is “certainly foreboding that it’s not even winter yet, and prices are skyrocketing,” RBN Energy LLC analyst Lindsay Schneider said of natural gas.

Heavily populated countries such as China are clamoring for more oil, in part to accommodate rising demand for gasoline and other travel fuels, and in part to use crude in place of natural gas.

Rystad analysts expect more elevated levels of switching from gas to oil in power generation this winter. They estimated that Asia alone could boost oil demand by 400,000 b/d over the next two quarters, creating more upward price pressure.

At the same time, damage caused by Hurricane Ida in late August cut into oil and gas production in the Gulf of Mexico for much of September. This curtailed already limited U.S. crude output that has yet to return to pre-pandemic levels.

Pre-Ida, production had reached 11.5 million b/d, though that was still well below levels prior to the pandemic.

Demand, meanwhile, is expected to rise. OPEC in September said it expected global oil consumption would grow by 6 million b/d in 2021 and another 4.2 million b/d next year, reaching an average of 100.8 million b/d in 2022. That would put demand on par with 2019 levels, before the pandemic.

“Energy and oil demand have picked up significantly in 2021 after the massive drop in 2020,” OPEC Secretary General Mohammad Barkindo wrote in a report. “Continued expansion is forecast for the longer term.”

Rystad’s Tonhaugen said “it’s not that OPEC-plus does not recognize the coming supply shortage. The group is well aware of the global inventory draws, maintenance work and rising demand, but chose to wait until later this year to adopt a bolder supply approach.”

He said markets will closely watch demand trends over the remainder of this month to gauge the cartel’s next move.

“The recovery of the economy, the potential of a cold winter and fuel switching from gas to oil in Asia suggest a rather quick demand increase to as much as 100 million b/d in December,” Tonhaugen said.

However, he added, “if prices keep on rising, the elasticity of oil demand may kick in as consumers, out of cost reasons, cut consumption. Producing nations, and namely OPEC-plus, have to be careful not to allow prices to inflate too much; otherwise, we may see an adverse reaction that could negatively impact post-pandemic economic growth.”