OPEC-plus members, including Saudi Arabia and Russia, agreed on Wednesday to cut crude production by 2 million b/d. It marked the coalition of oil-producing countries’ largest pullback on output since the early days of the pandemic in April 2020, a move that could both send prices back to $100/bbl and aid Russia’s escalating war in Ukraine, analysts said. 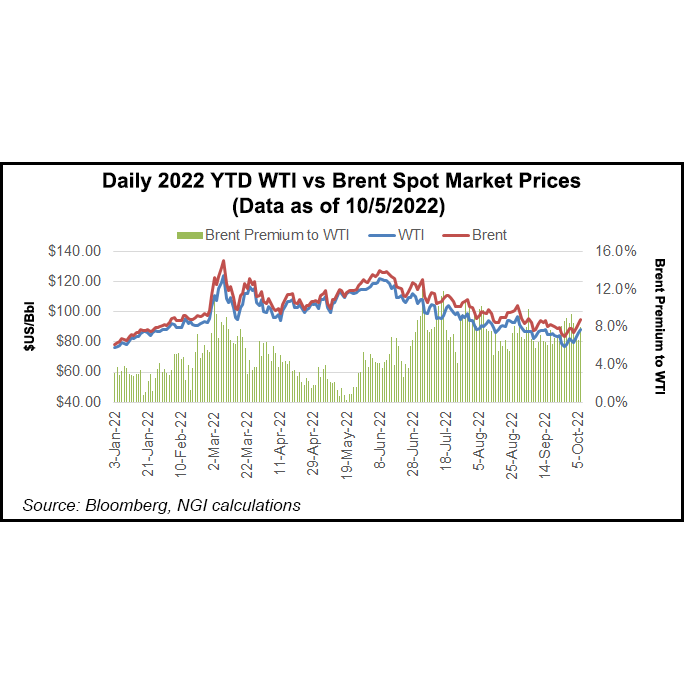 Citing recessionary headwinds and the potential for curtailed global demand, the cartel moved to curb the world’s supply of oil and tame recent pressure on prices. Brent crude, the international benchmark, lost more than 30% between its 2022 peak in June, when prices topped $120/bbl, and the end of September.

The reduction comes “ahead of a potential decline in Russian exports later this year,” but it “could be justified by the recent large decline in prices,” Goldman Sachs & Co. analyst Damien Courvalin said.

Rystad Energy’s base case for oil supply, updated ahead of the OPEC-plus decision, envisioned the global market shifting from a deficit relative to demand to an oversupply during the final three months of this year. It cited robust summer growth in U.S. production, which reached a 12.2 million b/d pace early in the season and marked the highest level since prior to the pandemic.

The Biden administration also released supplies in recent months from the Strategic Petroleum Reserve in an effort to tamp down oil prices and, by extension, gasoline costs for American consumers. Prices at the pump have dropped substantially over the past several weeks.

However, Rystad analyst Jorge Leon said a cut of the magnitude that the cartel targeted for November could keep supply trailing demand and push prices back to the $100 level. Brent prices hovered around $93 following the OPEC-plus announcement, up about 5% from a week earlier. “Reduced supply in the market has obvious upward price indications,” Leon said.

OPEC-plus previously trimmed its crude output target by 100,000 b/d for October. The move essentially offset a targeted increase of 100,000 b/d in September after much larger bumps in prior months.

In its latest monthly oil market report, OPEC projected crude demand would rise by 3.1 million b/d this year and 2.7 million b/d in 2023 to 102.7 million b/d. That would exceed pre-pandemic highs. However, cartel researchers also noted an “ongoing high level of uncertainty” in major economies and “increased volatility” in oil markets.

American producers have recently pulled back as well. U.S. output in the final week of September was flat week/week at 12.0 million b/d but down by 200,000 b/d from the 2022 peak, the Energy Information Administration reported Wednesday. Output remains far below the record level of 13.1 million b/d reached in March 2020, prior to coronavirus-driven demand destruction that year.

Cartel members framed their latest decision as a measured response to potential economic weakness. Inflation that has reached a 40-year high in 2022 curbed economic growth in both the United States and Europe, spurring central banks to aggressively raise interest rates to slow spending. Historically, after rapid rate hikes, recessions have followed. What’s more, China, the world’s largest oil consumer, is in the midst of economic challenges, triggered by ongoing pandemic-related restrictions tied to a zero-tolerance Covid-19 policy.

Analysts, however, said the OPEC-plus decision to curtail output could reignite inflation pressures in the United States and Europe – intensifying the threat of an economic downturn. It could also enable Russia to sell its oil on the global market for greater profits, bolstering the Kremlin’s finances as it amplifies its war effort.

Russian officials had lobbied for the cut.

Following myriad battlefield setbacks, Russia last week reported damage to four lines on its Nord Stream natural gas pipeline system that connects to Europe. That has raised doubts about already reduced flows of gas to the continent as the Kremlin retaliates against Western sanctions, including an oil import ban by the United States. U.S. and European officials said Russian sabotage was the likely cause of the Nord Stream damage. Russian state-run Gazprom PJSC also warned it may halt all supplies to Western Europe via Ukraine.

The Kremlin then announced last Friday (Sept. 30) that it would annex about 20% of Ukraine, ramping up tensions. All of that followed Russian President Vladimir Putin’s threats earlier in September of a nuclear weapon attack on Ukraine.

Sanctions have hampered Russia’s oil deliveries to the West. Russia has lost roughly 1 million b/d of production since the onset of the war last February. It faces further pressure in the form of a European Union (EU) oil embargo slated for December.

EU countries on Wednesday also agreed to impose a price cap on Russian oil. Officials did not immediately set a specific price level for the cap.

Russia, however, has been able to sell oil once destined for the West to India, China and elsewhere in Asia. The OPEC-plus production cut would likely support prices for those sales in coming months, assisting Russia at a time when President Biden and his administration have lobbied Saudi Arabia, which leads OPEC, to maintain output to both contain prices and hinder the Kremlin’s war effort.

All of that noted, OPEC-plus members have struggled this year to meet production targets and have often fallen well short of goals, Rystad has noted. This is because of aging infrastructure and geopolitical strife punctuated by Russia’s invasion of Ukraine.

A cut of 2 million b/d would equal about 2% of the world’s output. At times this year, however, OPEC-plus has missed its production targets by as much as 3 million b/d. As such, the actual hit to supplies currently working their way through the global market likely would be smaller than the cartel’s headline target.

Still, analysts at ClearView Energy Partners LLC said the OPEC-plus move is a significant signal to the rest of the world that it is committed to supporting prices – and likely Russia’s war.

The ClearView team said a “super-sized” output reduction on the same day that the EU formally agrees to implement a price cap on Russian oil presents “a clear signal that opposition emanates from both the Kremlin and the Kingdom” of Saudi Arabia.