Member nations to the Organization of the Petroleum Exporting Countries (OPEC) agreed to maintain production of 30 million b/d, but analysts say the cartel is watching several key developments — including rising shale oil production in North America — as it looks to keep oil prices steady. 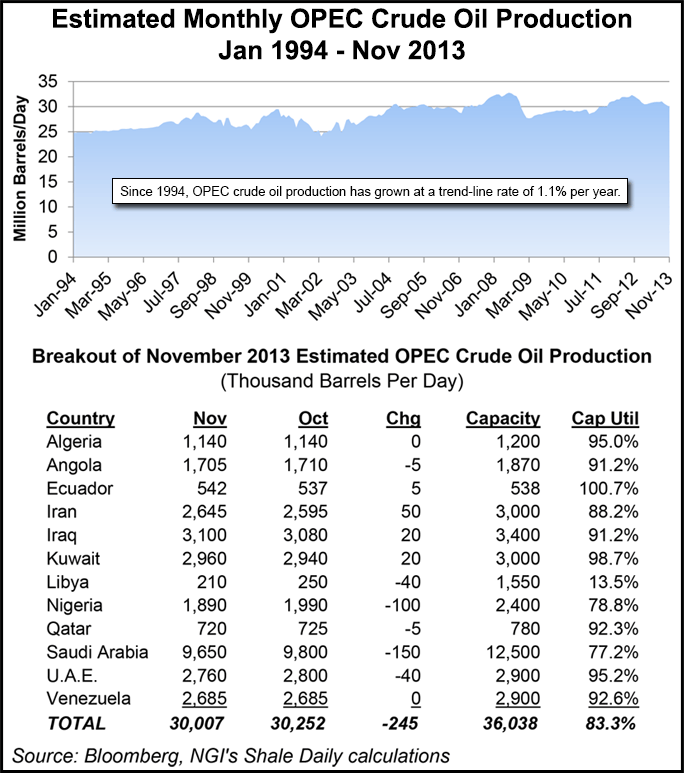 Meanwhile, Voice of Russia (VOR), the Russian government’s international radio broadcasting service, purported that shale oil in the United States was “simply a wave, not a revolution,” based largely on an interview with an analyst who said shale would be a factor for another five years, no more.

OPEC officials concluded their meeting in Vienna on Wednesday. In a statement, the 12-nation cartel said that “in the interest of maintaining market equilibrium, [OPEC] decided to maintain the current production level of 30 million b/d.

“In taking this decision, member countries re-confirmed their readiness to swiftly respond to developments which could have an adverse impact on the maintenance of an orderly and balanced oil market.”

Those developments, according to an analyst at Barclays, include production uncertainties from Iran, Iraq and Libya, but also a strengthening U.S. dollar and shale oil production growth in the United States. That growth has reportedly been displacing crude oil imports from West Africa, especially Nigeria.

“The concern in the market for a while has been, ‘What happens to these OPEC member exports if more volumes get displaced — especially from the U.S. East Coast starting in 2014?'” Barclays analyst Miswin Mahesh said in a note Thursday. “This trend is of special significance given OPEC’s aim to manage surpluses and keep markets in balance.

“So far, displaced import barrels from the U.S. have been diverted to Asia, with Indian refineries in particular showing a healthy appetite for crude given the rich distillate yields the crude grades offer.”

In an interview with Deutsche Boerse Group’s MNI news service, Nigeria Oil Minister Diezani Alison-Madueke said the cartel believes that emerging shale oil production in the United States, China and South America was “going to impact the global scene, and we have to watch that carefully.”

Mahesh said Qatar, Saudi Arabia and the United Arab Emirates would benefit from a stronger U.S. dollar because their currencies are pegged to the reserve currency. “Our economists expect the appreciation of the U.S. dollar to be a theme going into 2014, especially given the expected start of trimming asset purchases,” he said. “This trend is something to factor in when calculating breakevens for those Gulf oil producers that would benefit from U.S. dollar appreciation.”

In a roughly translated report published online Tuesday, VOR said “the euphoria from shale oil will soon go away. OPEC has made a statement about the short-lived effect of the coup d’Ã©tat in the extraction of hydrocarbons.”

According to VOR, OPEC concedes the United States has seen successful so far in reducing its dependence on foreign oil by increasing domestic production, of which shale has played an integral part. But the cartel cites research that forecasts declining production volumes at many shale oil deposits in the U.S.

“OPEC admits that non-traditional sources will additionally give the United States up to 5 million b/d,” VOR said. “But already in 2018 only illusions will be left of that effect.”

“Unlike production from a traditional well, production from a shale oil well is fairly short term,” Razuvayev said in a translated statement. “In other words, they would reach a maximum production volume, but there would then be a landslide drop.

“The United States wanted to decrease their dependence on the oil supplies from the Middle East in the short term. They succeed in doing that. [But] they have tested their [unconventional drilling] technologies, [and] it turned out that they are not that profitable.”