In its first detailed estimates for 2022, the Organization of the Petroleum Exporting Countries (OPEC) said Thursday global crude demand would increase through next year as coronavirus vaccination efforts expand and consumption of travel fuel mounts. 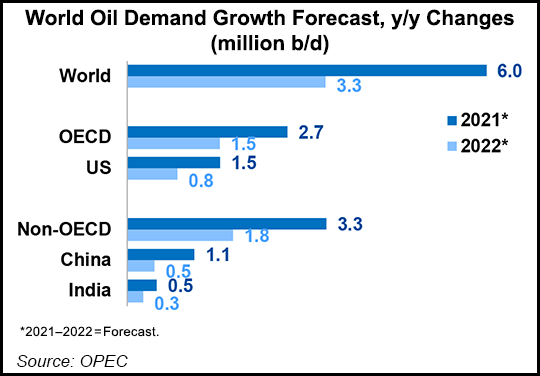 “Solid expectations exist for global economic growth in 2022,” OPEC researchers said. “These include improved containment of Covid-19, particularly in emerging and developing countries, which are forecast to spur oil demand to reach pre-pandemic levels in 2022.”

Production, at current levels, would fail to keep pace with global consumption. OPEC said demand is on track to exceed supply by 1.5 million b/d in August, a gap that could widen further to 2.2 million b/d before the end of 2021. Demand next year should remain well above current output.

Researchers said, however, that the Delta variant of the coronavirus – and potential for other dangerous variants to emerge – make forecasts tricky and production planning precarious.

Saudi Arabia-led OPEC and its allied group of leading producers headed by Russia, aka OPEC-plus, this week reached a tentative deal to raise output by about 400,000 b/d each month from August to December.

However, the agreement awaits the approval of ministers at the next OPEC-plus meeting, which has not yet been scheduled.

At issue: the United Arab Emirates (UAE), a member of the cartel, said it had tabled one-third of its output as part of previous OPEC production cuts. To compensate, UAE now wants to be allowed to increase output more than other members.

OPEC had reached a compromise with UAE to allow it to increase production to 3.65 million b/d in 2022. UAE had lobbied to boost its output to 3.8 million b/d from 3.2 million b/d, the Wall Street Journal reported.

OPEC researchers made only vague references to the talks in the latest monthly report. OPEC-plus countries “will continue to closely evaluate the various factors that could impact the ongoing developments on a monthly basis, thereby being able to act swiftly in a very timely manner to safeguard the delicate recovery of the market balance,” they said.

OPEC-plus is currently adding more than 2 million b/d into the global market, a process started in May and continuing through July. Increases by the group since oil demand started to recover last summer will total about 4 million b/d at the end of July. The cartel slashed output by 9.7 million b/d early last year after the coronavirus curtailed demand.

U.S. production, meanwhile, has only inched ahead this year. Output rose by 100,000 bbl last week – following a 200,000 bbl increase the week before that, according to the U.S. Energy Information Administration (EIA). The 11.4 million b/d average for the July 9 week marked a 2021 high. However, output was still well below the early 2020 peak of 13.1 million b/d.