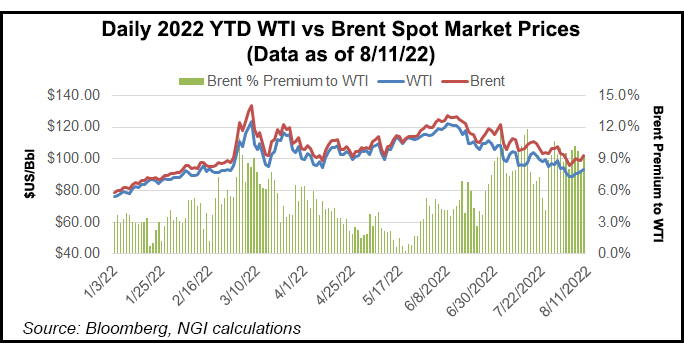 OPEC cited slowing economic conditions across the globe, notably including the United States. The U.S. government earlier this month reported that gross domestic product shrank in both the first and second quarters of 2022.

China, the second-largest economy in the world, is expected to grow by 4.5% this year, according to OPEC, down 60 basis points. The 2023 forecast for China was unchanged at 5.0%

A combination of the 40-year high inflation in the United States, war in Ukraine that fueled an energy crisis in Europe, and lingering pandemic woes in Asia intersected to fan recession fears and dim OPEC’s outlook.

Still, the researchers emphasized, they continue to expect both economic and oil demand growth overall this year, with momentum continuing into 2023, albeit at a more moderate level than previously forecast. They said 2022 demand would average a “healthy” 3.1 million b/d above 2021 levels, putting consumption on par with pre-pandemic levels. OPEC noted “the recently observed trend of burning more crude in power generation.”

Meanwhile, the International Energy Agency (IEA) on Thursday lifted its 2022 global oil demand forecast by 380,000 b/d, yet it only expects growth of 2.1 million b/d.

“Natural gas and electricity prices have soared to new records, incentivizing gas-to-oil switching in some countries,” the Paris-based agency said in its monthly oil report. “These extraordinary gains, overwhelmingly concentrated in the Middle East and Europe, mask relative weakness in other sectors.”

IEA said world oil supply hit a post-pandemic high of 100.5 million b/d in July, following maintenance season and increases in output this year by both OPEC countries and the United States. If the world market can maintain the higher pace through the year – offsetting lower levels in the first half of 2022 — it could roughly align supply with expected demand yet this year.

OPEC and an allied group of oil-producing nations this month agreed to lift output by 100,000 b/d in September. That would bring the OPEC-plus total production target back to pre-pandemic levels after a long recovery from the depths of virus outbreaks in 2020. The group has embarked on more sizable increases over the summer months.

In the United States, production for the week ended Aug. 5 climbed by 100,000 b/d to 12.2 million b/d, marking a 2022 high, the U.S. Energy Information Administration (EIA) said Wednesday in its Weekly Petroleum Status Report.