Ruby Pipeline LLC, the 1.5 Bcf/d natural gas system that moves supply from Wyoming to Oregon, has filed for voluntary bankruptcy to reorganize and relieve its debt obligations. 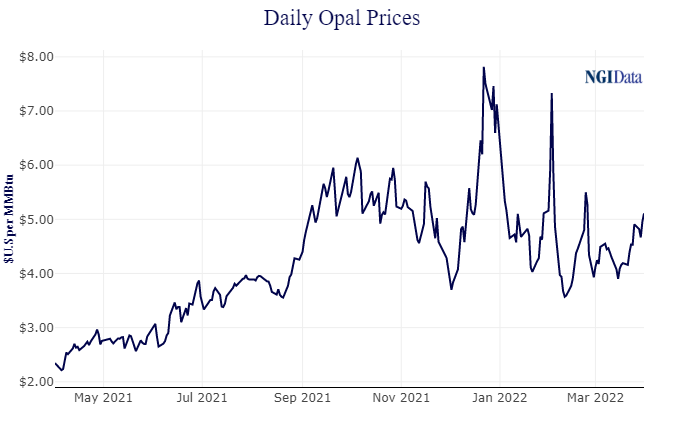 The 680-mile, 42-inch diameter system is jointly owned by Houston-based Kinder Morgan Inc. (KMI) and Pembina Pipeline Corp., based in Calgary. The Chapter 11 filing is “in response to an upcoming debt repayment obligation,” it noted.

The filing was made on Thursday in U.S. Bankruptcy Court for the District of Delaware (No. 22-10278).

“In recent months, the joint venture owners have been working diligently with Ruby’s bondholders in an effort to work out a mutually satisfactory resolution. While those efforts will continue, Ruby’s current financial condition necessitates this filing,” management noted.

KMI plans to “continue to operate the pipeline” as is permitted. “Ruby’s customers should notice no difference in its operations,” the filing stated.

The pipeline begins at the Opal Hub in Wyoming and terminates at the Malin, OR, interconnect near California’s northern border.

The system, which cost an estimated $3.7 billion, began service in 2011, with throughput averaging 800 MMcf/d. The project initially was created by El Paso Corp., which was purchased by KMI in 2011 before startup.

In mid-March, Fitch Ratings had downgraded the issuer default rating of Ruby to “CC” from “CCC-plus,” to reflect “expectations that a default appears probable when the senior unsecured notes come due on April 1…

“After the significant contraction of cash flows due to a large contract cliff in mid-2021, Fitch believes that Ruby will be unable to repay or refinance the notes. The company does not have a revolver credit facility. The estimated cash balance of $90 million at year-end 2021 is not sufficient for note repayment.”

Once the system is off the financial “cliff,” Fitch analysts expect “new contracts to provide immaterial profits for Ruby. The rating actions reflect the lack of a plan by management to commit to infuse equity or additional subordinated debt by April 2022. The absence of a plan by Ruby’s owners to address future financing needs in a timely manner would result in additional rating downgrades.”