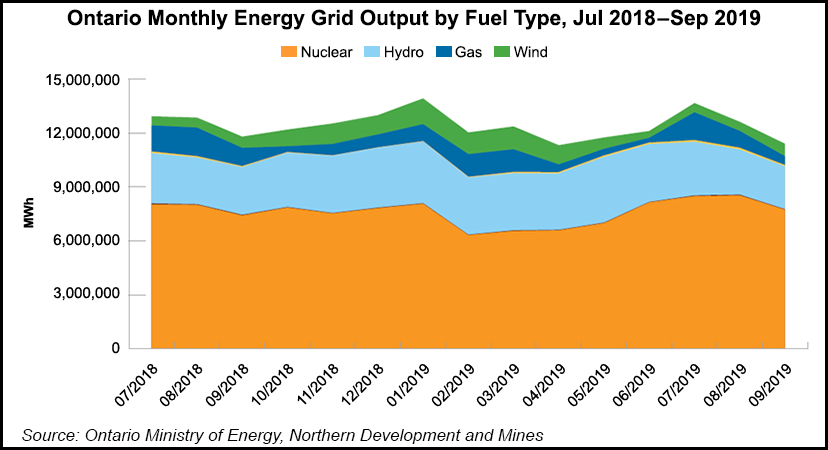 “Natural gas is the enabler of renewable energy and provides the flexibility required to ensure a reliable electricity system,” said OPG President Ken Hartwick. “This diversification of our portfolio is a natural fit.”

OPG also created Atura Power as a subsidiary. Along with the trio of plants, the new subsidiary plans to operate a fourth gas-fired generating station that was acquired last August.

“Atura Power has been established to operate and manage this portfolio of natural gas assets, which are strategically important to the current and future electricity system,” said OPG management.

The gas-burning power station network would enable the utility to quickly compensate for fluctuations in renewable energy supplies because of the natural variations of wind and sunshine.

The power plant purchase follows 15-fold growth since 2005 in renewable energy in Ontario to 10.8% from a negligible 0.7%, according to the Canada Energy Regulator.

Over the period, a provincial government green power policy has financed renewable energy with a feed-in tariff, or FIT, surcharge. The move cut the Ontario market share of coal-fired generation to zero from nearly 20%.

A government subsidy program put a stop to steep rate hikes that FIT inflicted on power consumers. However, the scheme still needs reform because the annual cost has ballooned to nearly C$6 billion ($4.5 billion), according to a new policy paper by the Ontario Energy Association (OEA).

“Current electricity subsidies are not targeted to those who most need the help,” said OEA CEO Vince Brescia. “Those who are low-income earners, for example, or those who have had incomes reduced or lost jobs due to Covid-19, these are the people the government should focus on.”