U.S. producers may have enough cash flow this year to double the onshore rig count from current levels, Raymond James & Associates Inc. said Monday. The only thing standing in their way could be a lack of pressure pumping equipment. 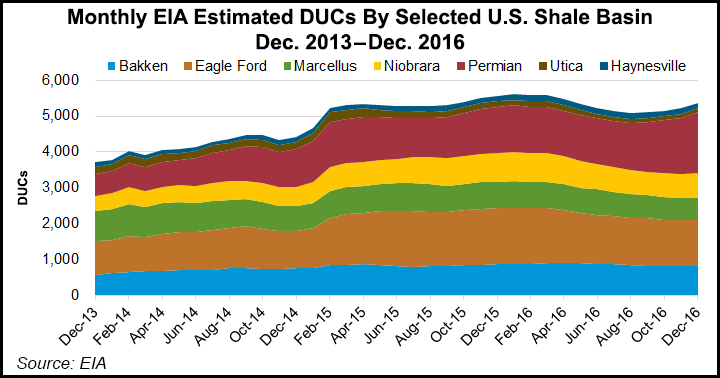 Exploration and production (E&P) companies have begun raising rigs on U.S. land at a frenetic pace, with investors now wondering how high the moon. It may not reach the moon, but analysts with Raymond James & Associates Inc. think it’s going to get a bit closer.

“Given the robust U.S. rig count growth over the past month, we are slightly raising our U.S. rig count from 800 to 850 rigs in 2017,” said analysts led by J. Marshall Adkins. Given the potential for hydraulic fracture constraints over the coming year, forecast of 1,100 U.S. rigs in 2018 was maintained.

The Raymond James team is bullish on three of the four metrics that influence the pace of drilling: oil prices, E&P cash flows available and access to capital markets. Only bottlenecks in the oilfield services (OFS) supply chain, i.e. fracture (frack) intensity, may be a hindrance.

“After exhaustive conversations with oil service providers and industry insiders, we continue to hold the belief that the combination of increased frack intensity per well and pressure pumping equipment attrition will constrain the industry’s ability to respond to a rising oil price environment well into 2019,” Adkins said. “Because of these anticipated oilfield bottlenecks, we believe oilfield pricing is poised to average about 30% higher over the next year. This is meaningfully higher than most E&P companies and oilfield service analysts are modeling.”

Concerns about emerging bottlenecks led Adkins and company to lower their U.S. rig count estimates last September to an average 800 rig count in 2017 and 1,100 in 2018. Through December, the count virtually tracked on top of their estimates. And in the past month, the onshore rig count has accelerated even faster.

As cash-strapped as they have been, U.S. E&Ps historically outspend cash flow, and that trend is likely to repeat in 2017. The move to raise the rig count forecast comes after the Raymond James team only last September reduced the 2017 estimate to 800 from 900 and the 2018 forecast to 1,100 from 1,250. Analysts said then E&Ps and OFS operators needed time to repair their balance sheets, plus they would be dealing with labor constraints and frack equipment issues once the upturn began. A backlog of drilled but uncompleted (DUC) wells also was expected to suck capital way from rigs and toward completions.

Balance sheet, labor and DUC issues should be “solved relatively quickly,” but the frack equipment constraints may be the more sustainable impediment to more oilfield activity.

“By the second half of 2017, we think pressure pumping equipment attrition will hit the 80% utilization range, where pricing surges and frack schedules become booked for months ahead of time,” Adkins said. “Until then, we foresee a continued surge in U.S. drilling activity as E&Ps push to outspend cash flows as they overcome key bottlenecks and surpass increased pricing from oil service companies.”

Even with frack constraints, E&Ps could continue drilling and build up their DUC inventories. However, there may be a limit in how much capital they want to tie up in DUCs that generate no cash flow. During the downturn, the DUC inventory may have been the only option because E&Ps were stuck in drilling contracts that they could have viewed as a sunk cost.

“By contrast, the level of drilling contracts in 2017 should be much lower than 2014,” said Adkins. “We still believe a U.S. rig count of around 800 active rigs will be the point where the wait for available frack capacity will slow the growth rate of the rig count…”

It’s probably no surprise where Raymond James expects the bulk of the rigs to land.

Through 2018, analysts see nearly 40% of the total count — and 50% of the oil-directed rigs — will be headed to the Permian Basin.

“After already reaching 278 rigs in the beginning of the year, we conservatively expect an average of 345 rigs in the Permian in 2017, or a 93% increase over the 2016 average, followed by a 25% increase in 2018 year/year,” said Adkins and his colleagues. “When combined with the other traditional oil basins, we expect over 70% of the rig count to be drilling for oil rather than gas.”

From mid-2016 through the end of 2018, look for a 250% increase in drilling activity in the three “major” horizontal oil basins — the Permian and the Eagle Ford and Bakken shales.

“Meanwhile, our bullish natural gas outlook will afford ample growth in our traditional gas basins,” with the Marcellus Shale expected to average 49 rigs this year — a 77% increase from 2016. The Utica Shale rig count is forecast to more than double year/year.