Domestic natural gas production growth is expected to keep pace with demand and exports this year, and inventories will build faster than the five-year average, keeping a lid on Henry Hub prices, which are expected to average just $2.89/MMBtu in 2019, according to the Energy Information Administration (EIA). 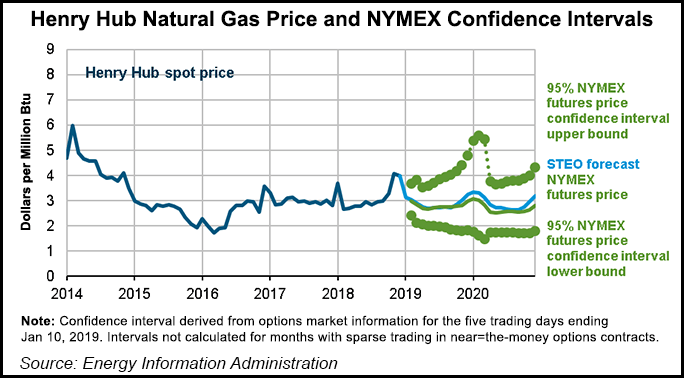 That would be a 26-cent/MMBtu decline from the 2018 average of $3.15/MMBtu, EIA said in its latest Short-Term Energy Outlook (STEO), which was released Tuesday, and a 22-cent decline compared with the $3.11/MMBtu prognostication in the agency’s previous STEO.

“Colder-than-normal weather and below-average inventory levels resulted in higher prices and volatility in November and through early December,” EIA said. “However, milder temperatures in the second half of December contributed to substantial decreases in prices, returning them to September levels. For the three weeks ending January 3, U.S. heating degree days were 20% less than normal.

“The moderate weather also helped to slow the rate of inventory withdrawals. Natural gas inventory withdrawals were 256 Bcf less than the previous five-year average for the three weeks ending Jan. 4, helping to narrow the deficit from the five-year average to 464 Bcf for the week ending Jan. 4 from 725 Bcf for the week ending Nov. 30.”

EIA reported a 91 Bcf withdrawal Thursday for the week ending Jan. 4, bringing underground storage to 2,614 Bcf, down 204 Bcf from a year ago and a hefty 464 Bcf deficit compared with the five-year average.

EIA expects dry natural gas production to average 90.2 Bcf/d this year, an 8.3% increase from 2018 levels, with a further 2.2% increase to average 92.2 Bcf/d in 2020. The expected growth in gas production “is largely in response to improved drilling efficiency and cost reductions, higher associated gas production from oil-directed rigs, and increased takeaway pipeline capacity from the highly productive Appalachia and Permian production regions,” EIA said.

LNG exports are expected to increase from an estimated 3.0 Bcf/d in 2018 to 5.1 Bcf/d this year and 6.8 Bcf/d in 2020. U.S. natural gas exports to Mexico via pipeline, which reached 4.6 Bcf/d through the first 10 months of 2018 ” should to continue to increase as more natural gas-fired power plants come online in Mexico and more pipeline infrastructure within Mexico is built,” EIA said.