Upstream technological advancements have fundamentally altered the outlook for natural gas and oil, with the Gulf Coast ready and able to expand gas export capability and petrochemical growth, according to a new study. 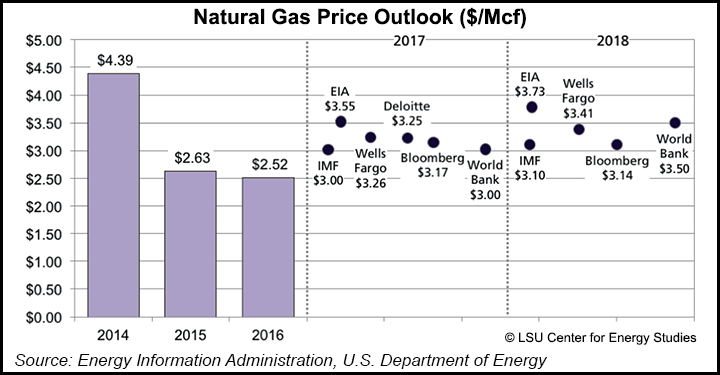 The inaugural “Gulf Coast Energy Outlook” by Louisiana State University’s Center for Energy Studies and E.J. Ourso College of Business, offers a broad overview of global and national energy market trends, with an emphasis on its implications for the two main states, Texas and Louisiana.

“Our research shows that the Gulf Coast has seen large increases in oil and gas production, with these increases concentrated in the state of Texas,” said co-author Gregory B. Upton Jr., assistant professor in the LSU Center for Energy Studies. “The growth of federal offshore production observed in the 1990s has been offset by U.S. onshore shale producers over this past decade. We are truly experiencing the next era of oil and gas production spearheaded by technological advancements made right here in our own Gulf Coast region.”

A plethora of expansions are underway along the Gulf Coast.

“We expect that these investments will continue in upcoming years,” Upton said.

The past 15 years or so have been phenomenal for the energy industry, but it’s also fallen victim to its own success, as increased supply has contributed to swiftly falling prices, first of natural gas starting in 2008, and then for crude oil starting in 2015.

“These sudden price changes have had economy-wide implications,” the LSU researchers said.

“In Louisiana alone, over $46 billion of capital expansions have already been completed since 2011, with another $96 billion in remaining announced projects,” said the researchers. “While all of these projects will likely not come to fruition, this represents a significant opportunity for the energy manufacturing sector in coming years.”

“Employment in both the upstream oil and gas extraction sectors and downstream refining and petrochemical sectors is expected to increase steadily in coming years…If natural gas prices continue to remain affordable and volatility remains subdued, this will provide the atmosphere necessary for continued petrochemical expansions.”

“U.S. natural gas production continues to be resilient and shows continued strong growth through 2020 and beyond,” said the LSU team. “The Gulf Coast region makes a significant contribution to the 80 Bcf/d U.S. market, but the Marcellus accounts for the largest relative share.”

Although Appalachia is vying for more gas-related investments, the Gulf Coast remains the go-to site for petrochemical expansions, with most of North America’s processing and refinery capacity concentrated in Texas and Louisiana.

“In recent years, the most important aspect has been construction boom in the sector, driven to a large extent by new natural gas production,” the LSU team said. “New extraction technology has produced lower and more stable prices of natural gas, the key input into the Gulf Coast’s chemical manufacturing sector.”

Gas production is the backbone for feedstock in the chemical manufacturing sector, and “low and stable prices have created a renaissance in industrial development in the Gulf Coast region.”

The feedstock is key in helping produce ammonia, methanol, and ethylene, and these industries in the Gulf Coast region have access to “consistent supplies of inexpensive natural gas,” which is likely to continue for decades.

LSU’s Center for Energy Studies has tracked Gulf Coast industrial expansions for several years, estimating that a total of $240 billion “of either already completed or announced capital expenditures” are heavily concentrated in Texas and Louisiana.

Most of the expenditures in the two states are in three categories — liquefied natural gas export, methanol/ammonia, and cracker/polymer.