Northern British Columbia (BC) still deserves its industry nickname as the “near frontier” where vast shale deposits of natural gas and liquid byproducts have barely been touched, according to the latest provincial supply assessment. 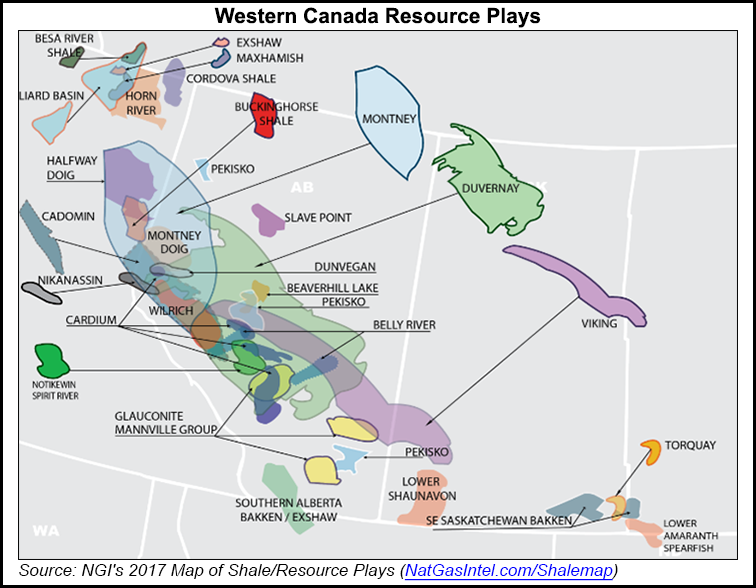 Only 1.4% of an astronomical 3,337 Tcf of gas in five BC geological structures has made the jump from estimated resources to tapped reserves, said the BC Oil and Gas Commission’s annual supply report.

Earth science calculations of the province’s “gas in place” natural endowment include 1,965 Tcf in the Montney formation, 848 Tcf in the Liard, 448 Tcf in the Horn River, 69 Tcf in the Cordova and 9 Tcf in the Deep Basin.

The total shrinks drastically to 41 Tcf on the stricter reserves yardstick, which only counts sites penetrated by wells, connected to markets and producing economically: 29.8 Tcf of Montney, 0.09 Tcf of Liard, 10.8 Tcf of Horn River, 0.07 Tcf of Cordova and 0.43 Tcf of Deep Basin.

Forecasts for the portions of the BC gas endowment that will eventually turn out to be marketable add up to 532 Tcf: 271 Tcf of Montney, 167 Tcf of Liard, 78 Tcf of Horn River, 9 Tcf of Cordova and 7 Tcf of Deep Basin.

Hopes for production leaps to fill tankers ran aground on fully supplied overseas markets and sinking prices. But BC output accelerated at a steady pace while the Alberta industry concentrated on oilsands development and backed off gas.

Since 2000, BC production has doubled to about 5 Bcf/d, according to records kept by the provincial commission and the Canadian Association of Petroleum Producers.

Alberta went the opposite direction. Production by the old Canadian gas mainstay province fell by 36% to 10.3 Bcf/d in 2016 from the 2000 peak of 16 Bcf/d, said the newly-released annual supply assessment of the Alberta Energy Regulator (AER).

BC emerged as the northern proving ground for horizontal drilling and hydraulic fracturing. All the gains — in resource endowment estimates, reserves and output — are owed to use of the new technology on previously impenetrable shale.

About four-fifths of current BC wells and production use hydraulic fracturing. The Montney formation accounts for nine-tenths of development as both the most accessible area and the richest in liquids, flowing 50 to 100 bbl per 1 MMcf of raw gas output.

About two-fifths of new Alberta wells use hydraulic fracturing. The advanced methods remain in trial stages or early development in large but little-known shale formations led by the Duvernay, as well as Alberta’s share of the Montney carpeting 130,000 square kilometers (52,000 square miles) along the eastern flanks of the Rocky Mountains.

Alberta gas production will continue to recede over the next 10 years by slipping 14% to 8.8 Bcf/d as of 2026, according to AER projections. Prices are expected to stay well below highs that fed conventional production peaks before the “shale gale” of rocketing U.S. production eroded Alberta sales to the United States, Ontario and Quebec.

Alberta also passed a turning point by consuming more than half of its gas production in 2016, AER said. “Alberta became its own largest market as provincial demand accounted for an estimated 50.5% of Alberta production, driven primarily by demand from the oilsands,” says the annual reserves review.

Consumption by thermal extraction processes, plant power generation and synthetic crude upgrading in the northern bitumen belt is forecast to reach 4.4 Bcf/d as of 2026, up 63% from the oilsands 2016 gas use total of 2.7 Bcf/d. Out-of-province Alberta gas sales are expected to be cut in half to 2.6 Bcf/d over the next 10 years.