Oneok Partners LP said it will expand capacity on its intrastate WesTex Transmission system by 260 MMcf/d as part of a broader plan to increase access to markets in Mexico for gas from West Texas and the Midcontinent. 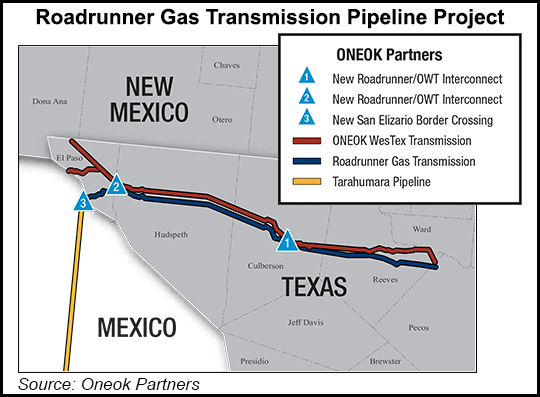 “This expansion project is complementary to our recently announced Roadrunner Gas Transmission pipeline project. These integrated assets will provide markets in Mexico access to upstream supply basins in West Texas and the Midcontinent, which adds location and price diversity to their supply mix,” said Oneok Partners CEO Terry K. Spencer.

Roadrunner is designed to extend from the Oneok WesTex Transmission natural gas pipeline system at Coyanosa, TX, to a new international border crossing connection near San Elizario, TX. From there, it would connect with Fermacoa’s Tarahumara Gas Pipeline. The intrastate WesTex system now consists of about 2,227 miles of pipe (see Daily GPI, April 1).

The Oneok WesTex expansion project, located in the Texas Panhandle and the Permian Basin in West Texas, includes the construction of two compressor stations and upgrades or expansions to three existing compressor stations. Total added horsepower is expected to be 38,800.

Oneok WesTex, which had qualifying open season bids exceeding 500 MMcf/d, will utilize 240 MMcf/d of existing capacity and create additional capacity by expanding its system by 260 MMcf/d; 90% of total available capacity was subscribed with firm take-or-pay agreements through an open season held in February.

The Comision Federal de Electricidad (CFE) has agreed to be the anchor shipper and has subscribed to firm capacity for a 25-year term. CFE generates, distributes and markets power for almost 35.3 million customers in Mexico.

“Through the Roadrunner project, we are pleased to have developed a strategic relationship with the CFE. This expansion of Oneok’s WesTex pipeline system will deepen this relationship while adding an additional source of fee-based earnings to Oneok Partners,” Spencer said.