Oneok Inc. plans to spend another $295 million to expand, for the second time in less than a year, a natural gas liquids (NGL) pipeline system in West Texas to increase takeaway for Permian Basin producers working in the Delaware. 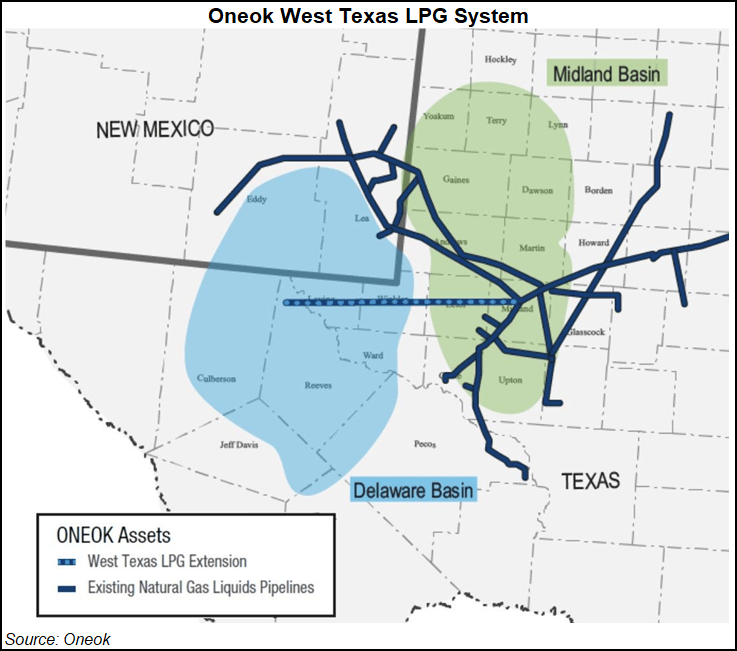 The expansion of the West Texas LPG LP system, scheduled to be ready in early 2020, is supported by long-term dedicated NGL production from six third-party processing plants in the Permian that together would produce up to 60,000 b/d, the Tulsa-based operator said.

Oneok’s first planned expansion announced in October 2017, is set to start up by the end of this month, and would add a 110,000 b/d lateral extension into the Delaware. The second expansion would add four pump stations, upgrade two others and loop pipeline to increase mainline capacity by 80,000 b/d.

In addition, infrastructure is to be added to connect the West Texas system with Oneok’s planned Arbuckle II Pipeline project, a 400,000 b/d NGL pipeline to be built between Midcontinent infrastructure in Oklahoma and existing NGL facilities in Mont Belvieu. The 530-mile, 24- and 30-inch diameter pipeline is expected to cost $1.36 billion.

Oneok’s West Texas NGL system now consists of about 2,600 miles of pipeline in Texas and New Mexico, which carry liquids to Mont Belvieu.