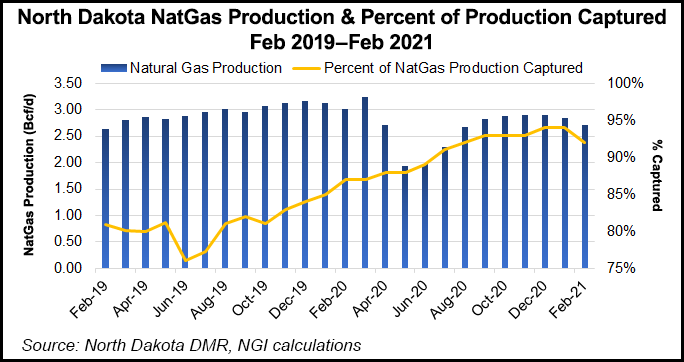 Management for the Oklahoma midstream company said the natural gas pipelines segment fetched $105 million in the first quarter of 2021, largely from the sale of 5.2 Bcf of natural gas from its storage assets during the February freeze. This was five times as much as it sold during the same period last year.

“Our ability to provide reliable service throughout the extreme weather conditions highlights the importance of market-connected pipelines and storage assets and the value of these vital services,” said Oneok Chief Operating Officer (COO) Kevin Burdick.

The sales occurred as temperatures plunged to record lows across the Midcontinent and Texas for 10 straight days, reducing flows on Oneok’s pipelines as wellheads froze. For the natural gas that did flow, customers in the daily spot market paid as much as $1,250/MMBtu.

Since the storm, Oneok has received “increased interest” from customers seeking additional long-term transportation and storage capacity on its system, according to Burdick. A binding open season for the incremental West Texas storage capacity is set to continue through May 27.

“Economics in the Midcontinent region also provided the opportunity to incentivize ethane recovery, and we continue to expect partial recovery in the region throughout the remainder of the year,” he said.

In the Permian Basin, though, Oneok saw a rise in ethane rejection during the quarter as widespread petrochemical facility outages related to Uri reduced ethane demand. The company expects ethane recovery in the basin to continue ramping back up as petrochemical demand returns, with full recovery expected in the second half of 2021.

“The petchem space got hammered here in the Gulf Coast, obviously, due to weather, but we’ve seen that pick back up and those operations restored,” Burdick said. “We’re also seeing new petrochemical plants being built across the global space. So, petchem demand is showing no signs of letting up and certainly, that’s why I say it’s a big part of our story. And it’s certainly a big part of our story when we think about 2022 and beyond.”

For now, discretionary ethane that can be recovered on Oneok’s systems in both the Mid-Continent and Rocky Mountain regions remains around 100,000 b/d, according to Burdick. The opportunity for recovery in either region at any given time is expected to fluctuate based on regional natural gas pricing, ethane economics and potential incentivized recovery, he said.

Recent mergers and acquisitions in the Bakken Shale could result in new drilling plans for acreage that may not have been developed in the near term but now are likely to be, particularly in Dunn County, ND, according to executives.

The Bakken, which spans across parts of Montana, North Dakota, Saskatchewan and Manitoba, “continues to outperform expectations and provide us with solid and stable earnings,” CEO Terry Spencer said.

Drilled but uncompleted (DUC) well inventory, increased natural gas capture and rising gas-to-oil ratios in the basin as well as increasing ethane demand present opportunities for earnings growth without the need for significant investment, according to the company chief.

In response to the renewed interest, Oneok has resumed construction on the Bear Creek natural gas processing plant expansion, which is expected to be complete in the fourth quarter. Once complete, Oneok would have around 1.7 Bcf/d of processing capacity in the basin. In addition, “we’ll be able to grow our volumes with minimal capital as producer activity levels increase,” said Burdick.

Oneok is working closely with producers including Continental Resources Inc., Marathon Petroleum Corp., ConocoPhillips and XTO Energy Inc. to align the timing of when the Bear Creek plant and additional field infrastructure goes into service with when additional volumes may begin flowing.

“You’re not going to see some massive step-change the day the plant comes up” because there is a desire to reduce flaring as much as possible. “And so the coordination among us and our customers is very tight on the timing of when the capacity will be available,” Burdick said.

Oneok said oil prices appear “at a nice level” that can generate” fantastic returns” in nearly every basin it operates, with the Bakken poised for meaningful growth beginning later this year.

The company expects to connect more than 300 wells to its systems this year, with a “significant increase” in well-connects expected through October as completion activity ramps up with improved weather, according to Burdick. There are currently 16 rigs operating in the basin, with eight on Oneok’s dedicated acreage.

In addition, there continues to be a large inventory of DUCs with more than 650 basin-wide and about 350 on Oneok’s dedicated acreage. “As the current DUC inventory gets worked down, we expect producers to bring rigs back to the basin to replenish the inventory levels, providing tailwinds as we move into 2022,” Burdick said.

The executive noted that as of February, about 100 MMcf/d of natural gas flaring remained on Oneok’s dedicated acreage, “presenting a continued opportunity for us to bring this volume on to our system and help further reduce flaring in the basin.”