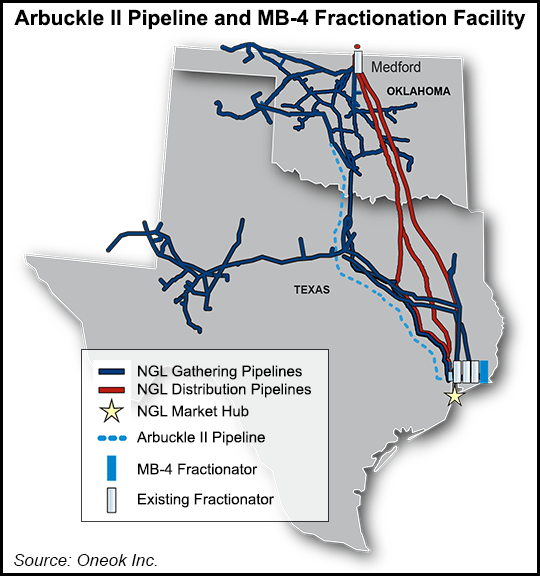 “With more than $4 billion of announced capital-growth projects since June 2017, we continue to build off of our significant asset footprint,” said CEO Terry Spencer.

The announcement came just weeks after Oneok said it would spend $1.4 billion to build the Elk Creek NGL pipeline stretching 900 miles from the Rocky Mountains to its existing Midcontinent facilities, which serve Oklahoma’s producers in the STACK and SCOOP, i.e., the Sooner Trend of the Anadarko Basin, mostly in Canadian and Kingfisher counties, and the South Central Oklahoma Oil Province.

Oneok’s latest plans include the 400,000 b/d Arbuckle II NGL pipeline, which would create additional liquids transportation capacity between the company’s Midcontinent infrastructure in Oklahoma and its existing NGL facilities in Mont Belvieu.

The 530-mile, 24- and 30-inch diameter Arbuckle II pipeline is expected to cost $1.36 billion. It would have the capability to be expanded up to 1 million b/d with additional pump facilities, which could more than double the company’s current capacity between the Midcontinent and Gulf Coast. Arbuckle II is expected to be completed in 1Q2020, Oneok said.

“The Arbuckle II Pipeline and MB-4 fractionator will help meet the needs of NGL producers in all of the basins where we operate, including the STACK and SCOOP areas and the Denver-Julesburg, Powder River, Williston and Permian basins,” Spencer said. “These strategic projects complement our recently announced Elk Creek pipeline, increasing Oneok’s ability to deliver NGLs from the Rocky Mountain region to growing markets in the Gulf Coast.”

The initial capacity of the Arbuckle II Pipeline is more than 50% contracted, and MB-4 is fully contracted, Oneok said. Both are anchored by long-term contracts with 10-20 year terms.

Oneok also said it plans to spend $400 million to build by late 2019 the 200 MMcf/d Demicks Lake natural gas processing plant and related field infrastructure in McKenzie County, ND. The plant, in the core of the Williston Basin, would be supported by acreage dedications with primarily fee-based contracts. It would increase Oneok’s Williston gas processing capacity to more than 1.2 Bcf/d.

The trio of planned projects is expected to generate adjusted earnings before interest, taxes, depreciation and amortization multiples of four to six times. Following recently completed equity issuances totaling $1.6 billion, Oneok expects project funding to come from cash generated from operations and short- and long-term borrowings. Oneok does not expect to issue additional equity in 2018 and well into 2019.

The Elk Creek pipeline and related infrastructure announced last month would have capacity to transport up to 240,000 b/d of unfractionated NGLs from near Oneok’s Riverview terminal in eastern Montana to Bushton, KS. It would have the capability to be expanded to 400,000 b/d with additional pump facilities. Oneok expects to complete the project by the end of 2019.

In October, West Texas LPG Pipeline LP, a joint venture between Oneok and Martin Midstream Partners LP, said it planned to invest about $200 million to expand its NGL system into the Permian Basin’s Delaware sub-basin. West Texas LPG Pipeline is an NGL pipeline system that consists of 2,600 miles of pipeline in Texas and New Mexico, providing transportation services to the Mont Belvieu, TX, market center from nearly 40 third-party natural gas processing plants in the Permian Basin.