Oneok Inc. said it plans to spend $1.4 billion to build a natural gas liquids (NGL) pipeline stretching 900 miles from the Rocky Mountains to its existing Midcontinent facilities, and may soon announce other projects as part of its $3-3.5 billion capital growth plans. 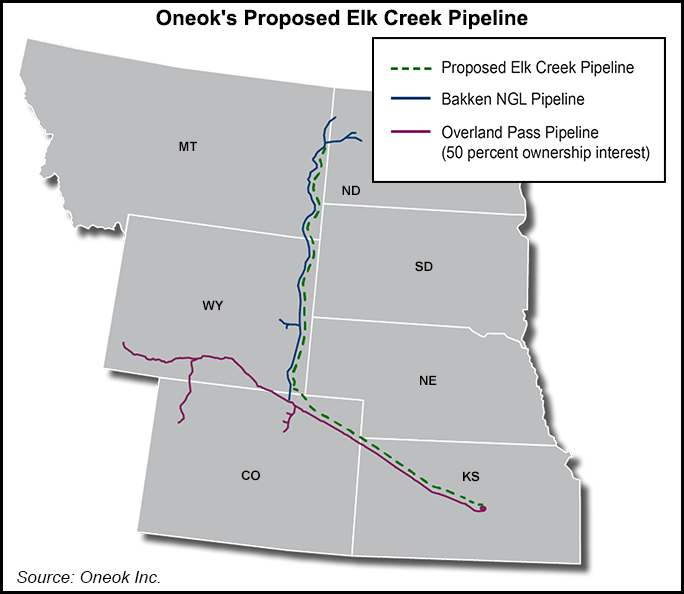 The 20-inch diameter Elk Creek pipeline and related infrastructure would have capacity to transport up to 240,000 b/d of unfractionated NGLs from near Oneok’s Riverview terminal in eastern Montana to Bushton, KS. It would have the capability to be expanded to 400,000 b/d with additional pump facilities. Oneok expects to complete the project by the end of 2019.

Oneok’s Bakken NGL Pipeline and the Overland Pass Pipeline, in which the company holds a 50% interest, are operating at full capacity, according to CEO Terry Spencer. Elk Creek’s proposed footprint would run parallel to most of the Bakken NGL system and the eastern portion of Overland Pass.

“Additional NGL takeaway capacity is critical to meeting the needs of producers who are increasing production and are required to meet natural gas capture targets in the Williston Basin. The Elk Creek Pipeline will strengthen Oneok’s position in the high-production areas of the Bakken, Powder River and Denver-Julesburg regions and also provide additional reliability and redundancy on our NGL system,” Spencer said.

Tulsa-based Oneok said the proposed pipeline is anchored by long-term contracts with 10-15 year terms totaling about 100,000 b/d, which is supported primarily by minimum volume commitments. The company expects the project to generate adjusted earnings before interest, taxes, depreciation and amortization (EBITDA) multiples of four to six times. Other projects with similar adjusted EBITDA multiples, all part of Onoek’s $3-3.5 billion capital growth plans, are in the late stages of development and “are expected to be announced when sufficient supply commitments are secured,” Oneok said.

The Elk Creek Pipeline would likely be financed with a combination of new equity, including around $450 million of net proceeds received from common stock issued during 2017, with cash from operations in excess of dividends and short- and long-term borrowings. Oneok expects to finance its additional capital-growth projects in 2018 and well into 2019 with cash generated from operations and short- and long-term borrowings.

In October, West Texas LPG Pipeline LP, a joint venture between Oneok and Martin Midstream Partners LP, said it planned to invest about $200 million to expand its NGL system into the Permian Basin’s Delaware sub-basin. West Texas LPG Pipeline is an NGL pipeline system that consists of 2,600 miles of pipeline in Texas and New Mexico, providing transportation services to the Mont Belvieu, TX, market center from nearly 40 third-party natural gas processing plants in the Permian Basin.

In early 2017 Oneok announced plans to acquire all of the outstanding common units of its master limited partnership, Oneok Partners LP, in an all-stock deal valued at $9.3 billion. Following the transaction, Oneok was expected to have a 37,000-mile network of pipelines to transport natural gas and NGLs. The combined company also has processing plants, fractionators and storage facilities in the Permian and Williston basins, and the Midcontinent, Midwest and Gulf Coast regions.