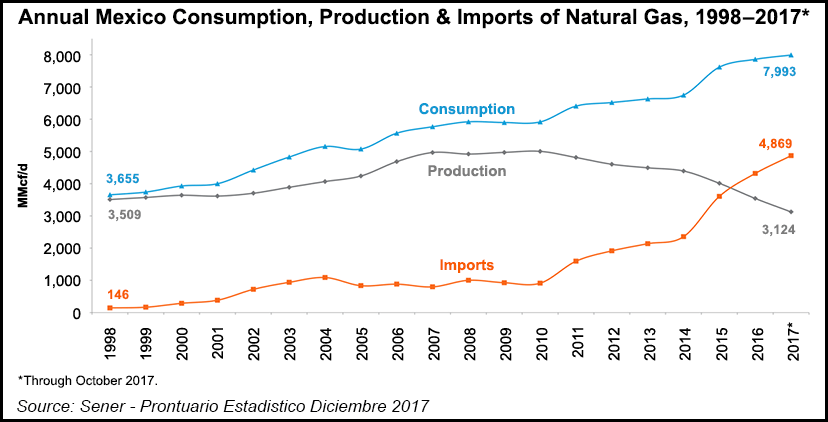 The compendium, known in Spanish as the Prontuario, brings together in one place statistics from the state oil company, Petroleos Mexicanos (Pemex), the trade ministry and Sener’s overall statistical service, the Sistema de Informacion Energetica (SIE) or Energy Information System.

Not only does the compendium cover statistics that otherwise appear in piecemeal fashion, it includes some, such as imports of liquefied natural gas (LNG), that are not to be found elsewhere.

In addition, the compendium amounts to a companion volume to the natural gas outlook published recently by Sener. “In 2031, natural gas demand is forecast to increase 26.8% compared to 2016,” according to Sener. “This growth is related to the expansion of natural gas infrastructure as well as the start up of various combined-cycle power plants.”

These and many other forecasts can be traced month by month and year by year by comparison with the real figures reported in the compendium. A detailed map is included on all of Mexico’s installations too.

A lot of the gas processing centers of Pemex are underutilized, the compendium indicated. The output of dry gas also has fallen, as has production of gas liquids, though these have stabilized recently.

Consumption of natural gas has risen to almost 8 Bcf/d, while domestic production stands at just above 3.2 Bcf/d. Imports from the United States make up the rest.

A section on transportation reviews the progress of Sistrangas, the national system for natural gas storage and transportation, including maintenance and equipment failures, and injections of LNG.

A comparison of fuel prices reveals that liquefied petroleum gas (LPG) is about five times as expensive as natural gas, at least in wholesale terms. Paradoxically, for a country where most families live on relatively low incomes, LPG is used in almost three quarters of Mexican homes. In fact, Mexico is considered the world’s largest consumer of LPG for domestic use. Firewood is used as the fuel of preference in more homes than natural gas.

The section on the Pemex petrochemical complexes indicated that only half of them are currently operational. Two have been out of use since 2007, while the Pajaritos complex has been closed since the 2013 explosion at its vinyl-chloride plant, a joint venture with Mexichem.