The total volume of proposed Canadian exports of liquefied natural gas (LNG) has jumped to 189.4 Tcf, or 20.4 Bcf/d as a result of the 12th entry into the tanker terminal project lineup. 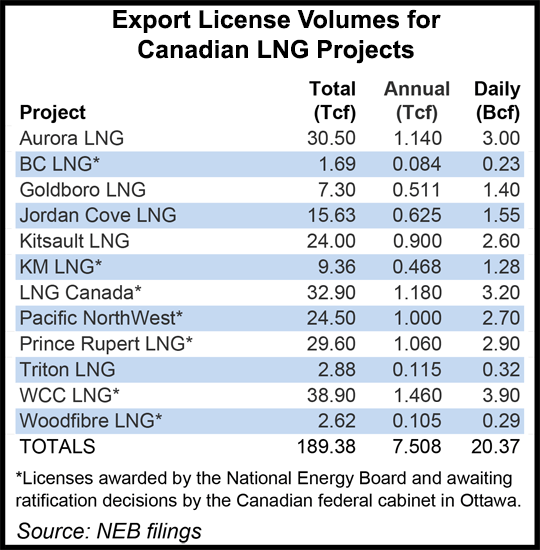 Kitsault Energy Ltd. filed an application to the National Energy Board (NEB) for a license to export up to 24 Tcf, or 2.6 Bcf/d, over 25 years. The company is named after its project site, a mining ghost town on the northern Pacific Coast of British Columbia (BC).

Entirely devoted to LNG hopes, Kitsault is a private firm that has no production or other gas industry assets. Owner Krishnan Suthanthiran is a Canadian citizen from India whose primary business is in the United States: Springfield, VA-based health care supplies distributor Best Medical International.

Until Suthanthiran announced the LNG plan and launched trawling for industry partners at a business conference in Ottawa last winter (see Daily GPI, Aug. 21, 2013), work on reviving the mining ghost town concentrated on a proposal for an ecotourism resort and conference center named after his mother: Chandra Krishnan Kitsault, which means “heaven on earth.”

Kitsault Energy’s export license application discloses that the company has no contracts for LNG sales, gas supplies or pipeline transportation from shale deposits in northeastern BC across the province to the project site near the bottom of the Alaska Panhandle. Partners are being sought on all commercial fronts, says the application.

To support committing 24 Tcf of as-yet untapped gas to an LNG export scheme forecast to cost C$30 billion (US$28.5 billion), Kitsault Energy cites astronomical estimates of shale resources in recent reports by the NEB and provincial authorities in BC and Alberta.

But the NEB’s latest national supply and demand estimates also confirmed that board and gas industry firms have skeptical views of the LNG projects and enthusiastic predictions by the BC government that multiple terminals will be built within a decade.

The lineup — called “the race to Asia” in BC, where political support for LNG exports was a cornerstone of the Liberal government’s successful re-election platform last spring — will only launch overseas shipments in 2019 at a beginner pace of 1 Bcf/d, says the late-2013 edition of periodic NEB Canadian energy futures assessment reports. The outlooks are crafted in consultation with industry experts.

In the board’s reference case, or the projections rated as the most likely outcome in light of current expectations for oil and gas markets, tanker loadings take until 2021 to double the initial snail’s pace to 2 Bcf/d, then only increase to 3 Bcf/d by 2035.

Even conservative forecasts could easily turn out to be wrong due to the current highly competitive and uncertain state of gas markets and prices, the outlook adds. The LNG traffic projection is merely a calculation of potential, the NEB forecast says.

“It is important to note that this is an assumption as opposed to a view on eventual LNG export volumes,” says the report. “This assumption allows for analysis of other key outcomes, such as gas production, energy demand and macroeconomic projections. This volume is not associated with any particular Canadian project.”

The energy futures report, released late last November, emphasizes that the LNG agenda is a work in progress that remains in early, sketchy stages. “The eventual volume of LNG exports may be higher or lower than assumed in this analysis,” the NEB says.

“Key uncertainties include North American natural gas prices, competition from other LNG supply basins, the pace of LNG demand growth, and the ability of Canadian LNG proponents to secure contracts with buyers. These, and other market factors, will determine the eventual volumes of LNG exports from Canada.”

All but two of the dozen tanker terminal projects that have matured far enough to seek Canadian gas export licenses call for locations on the Pacific Coast of BC. One, Goldboro, has a Nova Scotia site for Atlantic deliveries. Another, Jordan Cove, plans to send out Canadian gas via a Pacific terminal proposed for the Oregon coast.